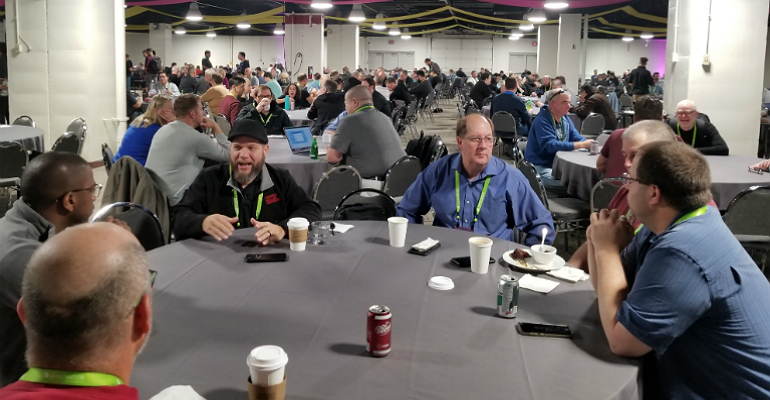 (Pictured above: Attendees take a break during the Jamf Nation User Conference in Minneapolis this week.)

JAMF NATION USER CONFERENCE — In the last few years, enterprise software vendor SAP has been administering and managing its growing deployment of Apple laptops, phones and other devices on its own as it has been giving workers the option to choose the machines they want to use for work.

Now the company has announced it will move its Apple deployments to software from Apple device management vendor Jamf to help SAP better manage and expand its popular user-choice device program for its employees. Some 18,000 Macs, 83,000 iOS devices and 170 Apple TV devices used by SAP workers will be brought together under Jamf’s flagship application, Jamf Pro.

The move was unveiled here at the Jamf Nation User Conference in Minneapolis, where Martin Lang, SAP’s head of mobility services, told Channel Futures that the company’s transition to Jamf Pro began about six weeks ago and will be completed by next summer.

“It was a strategic decision to move to Jamf,” said Lang.

Part of that decision was because more SAP employees want to move to Apple devices, so the company’s deployment of machines will likely grow, he said. Another reason for the move was because Jamf’s built-in app store is faster and more intuitive than the in-house app store SAP has been using for its workers. All the existing SAP apps will be offered to workers in the new app store.

“I don’t want to convince people about using a Mac, but I do believe there are more people at SAP who want a Mac,” he said. By 2020, he estimates that SAP’s Mac deployment will total about 30,000 machines.

So far, approximately 2,000 Apple devices used by SAP workers have been transitioned to Jamf Pro — and the process is continuing, said Lang. The process will take a while because users have to opt-in on their devices to make the transition from SAP’s existing mobile-device management system to Jamf Pro. The company will have to convince some users that all will be well after the changes are made, he said.

“Our users have to press a button — and that’s what’s going to take time,” said Lang. “They get concerned because things worked fine before and now they briefly lose their email address during the switch, so they are hesitant to make the change. To press that button is a bit of a scary proposition.”

Lang said he’s not concerned about the occasional user reluctance because when the process is complete, SAP’s new Apple device management system under Jamf Pro will be much improved.

SAP is taking a unique approach to its Apple deployment improvements using Jamf by choosing to manage all its Apple devices using one IT team, rather than creating separate teams for Mac and iOS devices.

“It’s a big deal because we can provide a consistent user experience across all those devices,” said Lang. “Whether you are using an iPhone or MacBook or a Mac, they will have the same look and feel across those platforms and with the same mindset from the IT staff. Most companies have a team for mobile devices and a team for desktop devices.”

SAP is also partnering with Apple to bring consumer-like experiences to enterprise apps, which until now hasn’t always been the case with typical SAP apps, said Lang.

“What it does, together with Apple, is that SAP built an SDK where you can connect a native iOS Swift app to an SAP system. This is a little bit of the magic, of the Holy Grail.”

The SDK enables all that data to go to the iOS apps, which process all the data that is sent to those SAP business applications, which wasn’t easy to do previously.

“This brings it all together so that Apple will arrive in enterprises even more,” said Lang. “At SAP, we are quite excited about this.”

As part of the effort, SAP has also been reorganizing its IT teams to create an Apple Center of Excellence team. In addition, SAP is bringing in Jamf’s recent integration with Microsoft Enterprise Security + Mobility (EMS), which provides automated compliance management for Mac and iOS devices accessing applications set up with Azure AD authentication.