Gammatech, makers of tough ruggedized notebooks, was kind enough to send me its Durabook R13S for review. The R13S is a 13-inch tablet notebook with a use-case mainly for the military. So why would we be testing it out? Well, maybe you're a VAR selling into a governmental or health-care environment where durability is a must. If that's the case, read on.

Gammatech, makers of tough ruggedized notebooks, was kind enough to send me its Durabook R13S for review. The R13S is a 13-inch tablet notebook with a use-case mainly for the military. So why would we be testing it out? Well, maybe you’re a VAR selling into a governmental or health-care environment where durability is a must. If that’s the case, read on.

The Durabook R13S won’t disappoint. I won’t hold back — I loved this thing. Even as a Mac user, I can pass on aesthetics for muscle and tough rugged design. The Durabook R13S is roughly 3 inches thick, comes with a heavy-duty clasp to keep the monitor locked down, and includes a carrying handle that houses a stylus. Every single port on the device has its own little rubber door to plug and protect it, with major openings for the optical drive, battery and SD Card reader getting full lockable doors. Plus, it features a spill-resistant, backlit keyboard that was nice and responsive despite feeling squishy. The LCD screen had an accurate resistive touch screen with quick-rotation buttons attached for orientation needs.

Being military-grade, the device doesn’t have a web cam due to security restrictions, but the trade-off is a fingerprint reader.

The whole thing weighs in at a 9 pounds, which sounds heavy, but considering all the rubber, aluminum and plastic, it looks heavier than it feels. Plus, the handle makes it easy to transport. The rubber, shock-absorbent corners and handle make it feel sturdy and I wasn’t gentle with the R13S. I frequently tossed it into my car (although I wasn’t brazen enough to toss it from my car).

The R13S is equipped with low-voltage hardware (Merom, Ultra Low Voltage [10 watts] at 1.06GHz) but has 2GB of RAM and a good chunk of other goodies you’d expect from any other standard laptop. But the real gem is  the 9-cell battery, which gives the R13S an incredible “official” six-plus hours. Now, I’m sure it’ll get six hours, but I put the brightness on full and used the keyboard backlight constantly, which gave me a good 4.5-hour run regularly. I pushed the battery some more by giving it a full charge, and leaving it in hibernation for a week. The result was the battery only dropped 20 percent.

I took the time to use the touch screen and stylus to try out Windows 7’s handwriting recognition. Let’s just say it’s not a strong point, but I did enjoy touching the screen from time to time a la iPad. The resistive nature of the touch screen requires you to press hard with the stylus to get some sort of legible word. The screen, however, is waterproof. 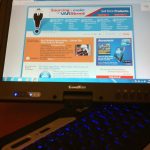 Now, the Not So Great…

But with all good devices are some cons:

The fingerprint reader was wonky. It took me quite a few tries to get it to recognize my fingerprint, and then after a successful scan, it frequently took five or six scans to log in to Windows. I can only imagine that if one had dirty fingers out in the desert, or anywhere a Durabook would be needed, you might not want to use this feature.

The keyboard — because it was so squishy and spill-resistant — sometimes didn’t register a key if I didn’t press it hard enough. A few typos resulted.

The real nuisance on this device was actually the touchpad. It’s incredibly tiny! What’s more, the mouse buttons were tiny as well, and stiff to click. I’m not sure what the status is on rugged touchpads, but I would think they — at the very least — could be bigger. The touchable surface area couldn’t have been more than 1 inch by 1 inch. My finger often hit the edge of the touch pad before I could make it across the screen, so I jacked up the sensitivity.

One thing troubled me, but I wasn’t ever able to consistently reproduce it: Twice, when swiveling the screen to tablet mode I got a Blue Screen of Death. It made me apprehensive to move the screen too much. A mission-critical laptop shouldn’t blue-screen when you need it to do what it was built to do.

Still, there were so few cons about this device, I was sad to let it go (though I won’t miss the weird looks at Starbucks). The R13S has a price tag of $3,000+, and for good reason. The build quality holds up. I didn’t have time to test every single I/O on the device, but you can check out all the ports it has here.

Final Verdict? I give the device a score of eight out of 10. Despite a few quirks, the Durabook R13S kicks as much butt on your desk at home as it would in the battlefield.