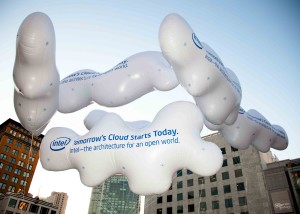 How will Intel help channel partners to potentially profit in the cloud? TalkinCloud expects to receive three clues — or more — from Intel over the next week. The story starts this week at Parallels Summit in Orlando, where Intel Chief Cloud Engineer Billy Cox is set to attend and address channel partners. The story continues Feb. 27-28 in Las Vegas — site of the Intel Solution Summit for channel partners. And the chatter should get louder on March 3, during an Intel Day in the Cloud event, hosted in Portland, Ore.

It’s a safe bet Intel will likely update the Open Data Center Alliance effort, which involves more than 70 global businesses so far. And watch for the chip giant to reinforce the Intel Cloud Builders initiative at  all three events. According to Intel, cloud builders is a “cross-industry initiative aimed at making it easier to build, enhance, and operate cloud infrastructure. Intel Cloud Builders is relevant to enterprises, hosters, telcos, and service providers looking for transformational guidance that will yield more simplified, secure, and efficient cloud infrastructure.”

Sounds great — but where do smaller VARs and MSPs fit inthe conversation? I’ll be sure to ask Intel’s Cox during this week’s Parallels Summit. And next week, Intel GM Jason Waxman will offer an update on Intel’s Cloud 2015 vision and strategy.

The Cloud 2015 strategy, announced around October 2010, includes three components, according to Intel: