If Project Cortex works as Microsoft envisions, it will streamline, or in many cases eliminate, the need for individuals to interrupt their work to search for internal information. Project Cortex, introduced at this month’s Microsoft Ignite conference in Orlando, Florida, was a stealth effort in the works for more than two years.

Project Cortex also promises to give Microsoft’s vast partner ecosystem much to digest going into 2020, particularly as customers look to utilize it to enhance their collaboration and employee productivity efforts and Microsoft begins offering training and enablement for partners.

Company officials described Project Cortex as the first major new productivity and collaboration service planned for Microsoft 365 since the launch of Microsoft Teams three years ago. Microsoft CEO Satya Nadella underscored the notion of bringing more seamless access to knowledge in context of whatever application a user is working in is a critical next step forward for the Microsoft 365 platform.

“Project Cortex takes what is data today inside of your organization and converts it into knowledge,” Nadella said during his Ignite keynote session.

Under development by the Microsoft SharePoint team alongside adjacent Office groups including Teams, Yammer and Outlook, Project Cortex uses the company’s AI, advances in Microsoft Search and its Graph APIs to create organizational knowledge networks that will enable customers to automatically surface collective information.

Project Cortex is scheduled to appear in Office, Dynamics and other connected applications in the first half of 2020. It’s not a product itself; rather, Project Cortex will apply its advances in artificial intelligence (AI) and machine learning, drawing on the Microsoft Graph APIs. 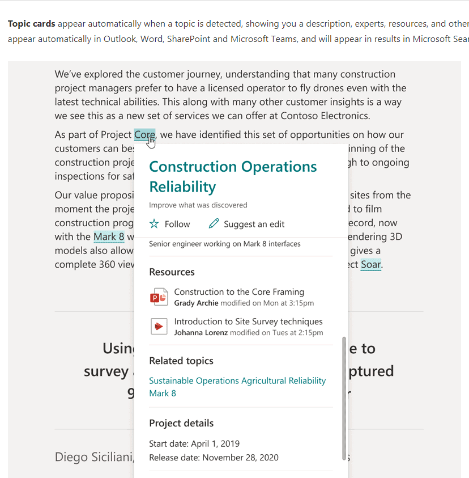 A topic card with resources appears when a user hovers over an acronym.

Using the Microsoft Graph, individuals will be able to find organizational information contextually, without switching applications. For example, Microsoft demonstrated at Ignite how a user can scroll over an acronym in any Office app to get a definition of what that acronym means through a topic card that appears without interrupting the reader’s flow, which inevitably occurs when searching for it in some other application.

“You now have AI-driven topics, so essentially you have AI creating topic wikis inside the enterprise,” Nadella said. “You have that ability now, in the context of any document or any email. More interestingly, you can find the experts who know something about that acronym, and you can really integrate and interact with them.”

Project Cortex will automatically use metadata that resides in distributed repositories in what Microsoft’s SharePoint team described as the next generation of core enterprise content management (ECM) services.

Chris McNulty, Microsoft’s senior product manager for Project Cortex, who works on the SharePoint team, underscored that Project Cortex is not a new platform, but rather building on the existing Microsoft 365 and SharePoint platforms.

McNulty noted that all of these capabilities will bring together and invoke the metadata within those specific services. For instance, with Microsoft Information Protection, Project Cortex will extract key metadata that can attach and invoke policies based on the value of a contract, he said. 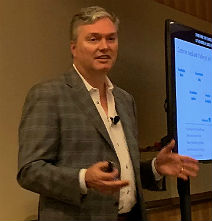 Seth Patton, general manager of Microsoft’s Office 365 marketing group, said during a briefing at Ignite that the company spent time with 25 customers in the development of Project Cortex, and 13 organizations are testing it a private technical preview. Patton said Project Cortex is centered around a common problem facing organizations – “knowledge drain” – the consequence of those with expertise leaving an organization.

“That knowledge is walking out the door,” Patton said.

While acknowledging that’s a problem that has long faced all organizations, Patton said the need for making internal knowledge more readily available with the appropriate controls to protect it is becoming more critical. What’s driving that acceleration, he noted, is …