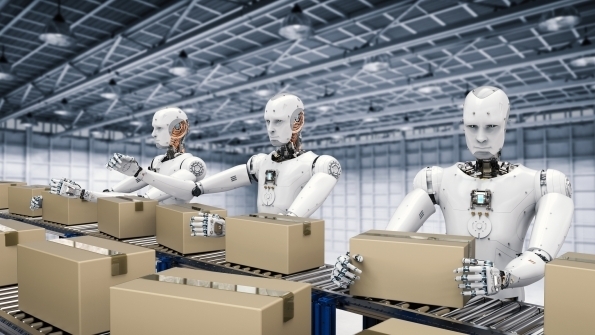 Zero One: AI, Machine Learning and the End of the World

Is AI a job creator or job killer? Should we be worried?

In the sci-fi movie “Children of Men,” people suddenly could no longer make babies, putting the human race on the brink of extinction.

A character in the movie gazes at Michelangelo’s masterpiece sculpture, David, and says to the art collector, “A hundred years from now there won’t be one sad f-ck to look at any of this. What keeps you going?”

The art collector replies, “I just don’t think about it.”

Back in real life, I’m at AI Summit in San Francisco’s Regency Ballroom during one of the hottest days of the year listening to speaker after speaker excitedly portend the end of the world. Will AI destroy people’s ability to make a living? It’s ironic to be sweating – no air-conditioners – inside an artsy ballroom built in 1909 as a bleak future of machines taking away human jobs unfolds before me.

The future really took shape after Frank Chen, partner at venture capital behemoth Andreessen Horowitz, took the stage. Chen cited amazing examples of AI happening today, where it might take off tomorrow, and how it can seize the networking effect and become ubiquitous. AI that replaces human labor can be cheaply implemented, he said.

To be fair, many of Chen’s examples earned my applause. An AI war drone entering dangerous buildings and mapping the interior, including people, so that a soldier doesn’t have to. An AI supply plane delivering blood to outlying communities in Africa. And, coming soon, an AI ear bud that translates foreign languages on the fly.

With other examples, though, I was reminded of the words of Martin Niemöller, a pastor who, post-World War II, warned about the dangers of complacency.

Chen showed a homemade, $2,000 AI system that classifies and separates cucumbers so that an elderly Japanese woman wouldn’t have to. At scale, this system would put a lot of produce sorters out of work. But that kind of low-value job is “ripe” for disruption, I thought, smirking at the cleverness of my pun. First they came for the Socialists, and I did not speak out – Because I was not a Socialist.

Next, Chen showed a video of AI robots doing a simple task. They weren’t like manufacturing robots programmed to do the task, he said. Rather, they were in the act of learning how to do the task. It wasn’t hard to imagine these robots replacing human workers en masse. The takeaway, I thought, was don’t make a career out of simple tasks. Then they came for the Trade Unionists, and I did not speak out – Because I was not a Trade Unionist.

Chen showed an AI agent that summarizes reports. Just about every company has someone doing this, he said. The AI agent can look at many reports and summarize them much more quickly than a human can. Whew, I thought, that was close. I’m glad I don’t just summarize reports; I write stories. Then they came for the Jews, and I did not speak out – Because I was not a Jew.

Then Chen showed how the Washington Post uses AI to write stories. He showed the stories on the big screen behind him. You can’t even tell that AI wrote them and not a journalist, he said. Then they came for me – and there was no one left to speak for me.

I began to wonder if anyone else was struck by Chen’s presentation, but attendees seemed happy. Perhaps all of this was figured out a day earlier at AI Summit during the session on ethics and AI, which I had missed. The speaker of that session was the chief innovation architect at Wells Fargo Bank – not exactly the beacon of ethical practices.

A couple of weeks earlier, I was at Mobile World Congress listening to a panel of AI experts, and someone asked about AI’s future impact on society. Many of the panelists painted a rosy picture of man and machine working together, harmoniously, efficiently, and with a nice return on investment.

Then Danny Lange, vice president of AI and machine learning at Unity Technologies, with previous stints at IBM, Microsoft, Amazon and Uber, spoke up. “Yeah, I do think that AI is going to take over the world and it’s also going to eat the jobs, but we can rest,” he said. “It’s going to take at least 10 years.”

Lange, one of the smartest people I’ve heard speak on the subject of machine learning and AI, delivered his comments deadpan. I’ll have to ask him if he was joking. Maybe we’re all like the art collector in the movie, joking in the face of looming disaster. After all, it’s better just not to think about it.