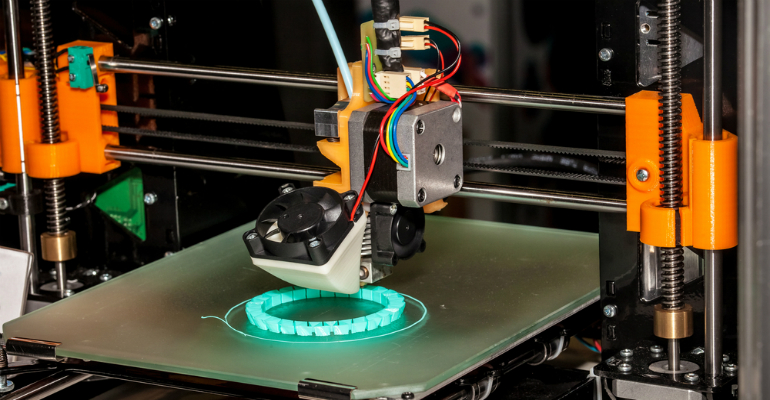 3-D printing is a next-generation technology that will revolutionize everything. There's a place for your partner business, but at a cost.

3-D printing is poised to be a $12 billion market this year, projected to reach $20 billion by 2021, according to IDC. Hardware, materials, software and services account for the global spending figures. So, if you’re a channel partner, you should be paying attention — but not for the reasons you think.

There’s printing – document printing as most IT partners are familiar with – and then there’s 3-D printing. There’s quite a bit of difference between printing onto a medium or substrate such as paper, for example, versus a process that prints upon itself to create a part, shape or object.

“We call it printing, but it’s not the same animal,” Keith Kmetz, program vice president for IDC’s imaging and printing areas, told us.

There was a time when, during the rise of the hype cycle for 3-D printing, there was a vision of a device in every household, school and business. But that’s not what happened. It’s more realistic to view 3-D printing as a commercial and industrial opportunity.

To date, 3-D printing has had its roots in prototyping, where designers and engineers print out a design to see how it looks, and go through an iterative process of making changes until the object is ready for production.

More recently, however, the goal for 3-D printing is to move up from a prototyping application to a final production opportunity. This type of 3-D printer is an industrial tool that can be used for prototyping, but also for final part production.

“3-D printing is in the beginning stages of being able to do this for a variety of reasons, such as part quality or speed of the process, for example,” said Kmetz.

Discrete manufacturing is expected to be the dominant industry for 3-D printing, with health care the second largest, says IDC’s 2017-2021 forecast. These markets will be followed by education and consumer, with professional services and retail spending on 3-D printing picking up the pace and moving ahead of the consumer segment by 2021.

A known entity among IT channel partners, HP Inc. talks about disrupting the $12 trillion 3-D manufacturing market with 3-D printing. HP introduced its 3-D printing technology in 2014, its first 3-D printer – the 4200 Series production platform – in 2016, and has been shipping in volume for more than a year. Since that time, the vendor expanded its 3-D printing portfolio with the introduction of the Jet Fusion 300/500 series, which allows manufacturers to produce engineering-grade, functional parts in full color, black or white.

“The strategy of HP is to disrupt how people design and manufacture,” Alex Monino, vice president global strategy and go-to-market director, HP 3D Printers, told us. “What that means, is that if you take where the market is today, between $4 billion and $5 billion, it’s small compared to other markets, but it has huge potential. And our goal is to disrupt the $3 trillion manufacturing industry.”

The vendor’s Jet Fusion 300/500 series is a lower-end product, with a lower price tag – beginning at $50,000 – that targets designers and engineers, enabling small-to-medium-size product development teams and design businesses, entrepreneurs, and universities and research institutions to access the technology.

The company’s goal is to have a portfolio of 3-D products at different price points with different go-to-market strategies for different target users.

For IT partners, HP stands out among the competition because it’s a known entity in the conventional printing market. Other players in the 3-D market are not vendors that IT partners tend to be familiar with, such as Japanese manufactures that are working on products, but don’t yet have commercially available offers, or Konica Minolta, which distributes for 3-D Systems, a 3-D printer vendor, and others such as Envision TEC, Stratasys and ExOne, to name a few.

For IT channel partners already familiar with HP’s Partner First partner program, they might know that in May 2017, HP launched the HP Partner First 3D Printing Specialization Program. Just a few months ago, the vendor expanded the program from a small number of specialized partners with the goal of doubling its number of 3-D specialist partners, according to Monino. HP has about 65 such resellers worldwide. The company offers two specializations — production and prototyping.

Cimquest, a manufacturing partner since 1990, is more what 3-D printer partners look like today. Cimquest has been successful in the 3-D printer market for about 17 years, first as a Stratasys partner, then more recently as an HP partner. Cimquest also is a leading Mastercam CAD/CAM VAR.

“We started seeing new technologies coming from players like HP who are new to this space and are approaching the market from a purely manufacturing standpoint. That really excited us,” Rob Hassold, CEO and founder of Cimquest, told Channel Futures.

Cimquest has grown its business geographically to 16 states — a benefit of the company’s expertise and shortage of other viable partner players.

Hassold believes that partners from the 2-D print world can transform to 3-D, but at a steep cost.

“If you’re trying to take your team that’s been in the IT space or 2-D printing side of the business … it’s so different and there’s so much knowledge that you need to leverage in this space. You’d really have to make a big investment,” he said.

IDC’s Kmetz agrees that mixing 2-D and 3-D can be a challenge.

“[It takes] a different set of personnel, skill sets, etc., that will target the 3-D printing area,” he said.

Stratasys got caught up in the 3-D hype several years ago when there was a push to get 2-D print partners into the 3-D world.

“Guess the thinking was, ‘Hey, what’s another ‘D’?'” Stratasys‘ Pat Carey, senior vice president of sales for the Americas, said. “It didn’t work out.”

Monino agrees. While not discouraging traditional HP First partners from exploring 3-D printing, he points out some of the challenges as well as what partners need to think about doing differently.

“First and foremost is the target 3-D market — you’re not talking to the IT managers anymore. The person that makes decisions in the account is different; it’s the engineering manager, or [the consult] happens in the manufacturing department,” he said.

The sales process for 3-D printers also is different compared to conventional printers.

“Everyone knows what to expect from a computer and printer. But because 3-D uses many technologies and applications, before a customer will make a purchase, they want to see a sample. There’s a process involved called benchmarking, where the customer sends the file to the reseller and the reseller prints it for them. Resellers are required to have a demo unit,” said Monino.

“It needs companies like HP to build a channel. There [are] two strategies to do that: Either hire new resellers or grow from your existing partners,” said Hassold.

“What we are finding today is that people do need a 3-D printer. They need a connected, manageable 3-D printer,” he said, referring to a group of designers or engineers driving the need for managed services, for example. As pricing drops, expect to see the democratization of the devices and more widespread use.

Carey already is having conversations with large customers who are asking for managed services for their 3-D printers comparable to what they have in their IT shop or traditional print shop.

“We will be driven to that at some point,” he said.

If b.digital, Blueit Group’s innovation lab, the global champion of the 2017 IBM Watson Build challenge, could leverage its MSP business strategy and come up with bioBOTGuard, a solution that uses drone technology and cognitive visual recognition through Watson APIs to help agronomists and farmers save time and money, why can’t MSPs transform their businesses, or some part of their businesses, to create opportunity in 3-D printing?

“It’s technology and an adjacency that requires a little bit of a different approach, but the skill sets that MSPs have learned and applied in other market opportunities still hold water when thinking about 3-D printing,” said Kmetz.

There’s the process, a machine, and materials – not necessarily ink and toner supplies – used to create the output.

“As far as services are concerned, the managed-services approach, that’s one of the things we expect to see more [of] down the road,” he said.

Whether that’s break-fix, or a partner uses software to manage a fleet, to drive optimization and efficiency — not only in the use of the technology but also in the implementation of the technology within the organization.

“A company wants to make sure the assets are used as judiciously as possible.”