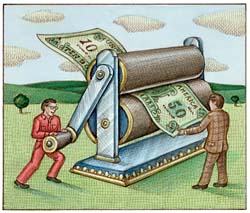 Over the past few days, I've seen a flood of activity in the MPS space. Some of it is vendor hype, but much of it shows real activity:

Over the past few days, I’ve seen a flood of activity in the MPS space. Some of it is vendor hype, but much of it shows real activity:

1. Dell’s Moves: During our MSPmentor Live webcast (March 18), Dell disclosed that it has been piloting managed print services with selected MSPs. March Wyatt, a channel printer account executive at Dell, says the pilot service supports printers from third-party hardware makers. Although Dell has not formally announced a managed print service, you can bet it’s coming. Check MSPmentor.net/events for a link to the archived event on March 23.

2. Hewlett-Packard: I can’t go into details yet, but there are rumblings that HP is about to put together some far more aggressive managed print efforts, coupled with the company’s Insight Remote Support tools. You’ll find more clues from HP in the company’s enterprise printing blog.

3. Ingram Micro: The company is hosting a half-day managed print seminar in association with the Ingram Micro Seismic Partner Conference in Dallas this May (http://www.ingrammicro.com/seismic).

6. Xerox: The company’s PagePack service has caught my attention multiple times. Xerox is quietly writing to open APIs and plugging into third-party managed services platforms. I expect to hear far more about the effort throughout 2009.

Ironically, I think the recession is forcing many MSPs to give the managed print market a second look for new profit opportunities.