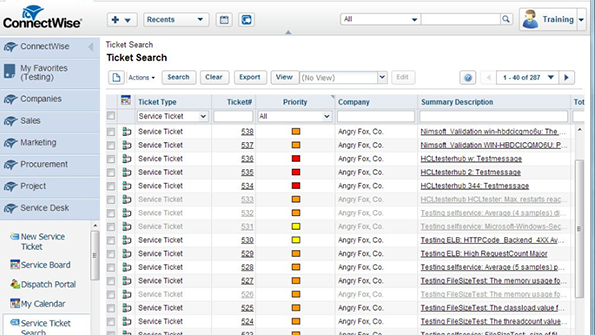 The nifty solution to a common problem for users of the PSA platform was the product of the vendor’s first-ever IT Nation Hack-a-Thon event.

The problem has long been a burr in the shorts of Andreas Lekas and his colleagues at Florida-based MSP iVenture Solutions.

Each time a new ticket is created on the ConnectWise Manage PSA tool, someone has to go in and manually add all of the various parties who wish to be notified on each communication.

The problem is so common, it was among five use cases rolled out by ConnectWise last November for its first-ever IT Nation Hack-a-Thon competition, an effort to stimulate a developer community and illustrate artful ways to overcome common product limitations.

“The case that we ended up choosing is: ‘company xyz’ wants to automatically have other contacts cc’d on all ticket communications,” said Lekas, an internal developer at iVenture. “Before, you would have to go and look at a list of contacts that a company would want contacted, and then every ticket, you have to put that ‘cc’ email in the ticket.”

​Lekas enlisted the help of co-worker Vince Chicerelli, a process engineer and a ConnectWise administrator for iVenture.

As they set off for IT Nation in Orlando, they felt that regardless of how things turned out, taking part in the competition would be a win-win.

“We read all of the use cases and this one hit home because it’s one that we actually grapple with at iVenture,” Lekas said.

“It’s a real thing that is actually influencing us,” he said. “Why not kill two birds with one stone and do something we can actually use internally?”

In addition, Lekas feels it’s important to support efforts to encourage custom development by MSPs, demonstrating how it’s possible to extend the functionality of the ubiquitous platform and solve real-world problems.

“I think that’s an extremely positive outcome from this conference,” Lekas said. “My whole job is around that.”

Lekas and Chicerelli kicked around a few approaches for solving the problem. One very

But they decided against that.

“We didn’t want them to have to go to another interface, when they spend 100 percent of their day in ConnectWise,” Lekas said. “We just wanted it to be as easy as possible.”

Instead, the duo decided on a tweak involving the “custom fields” function in ConnectWise Manage.

“We leveraged custom fields in ConnectWise to specify which contacts of a company should be cc’d on tickets,” Lekas explained “Once we have that custom field, all we have to do is listen to callbacks when a new ticket is created.”

“It sends a message to our integration and we look up what company the ticket was for, look up all the contacts that are specified as “cc” contact based on that custom field that we made, and we tell ConnectWise to add those contacts to the ticket – automatically,” he continued. “This whole process happens in less than a second.”

Designing the automation during IT Nation consumed every bit of the 7-or-so hours scheduled for the Hack-a-Thon, plus an additional eight optional hours of work in the wee hours, when the conference wasn’t going on.

The hack won Lekas and Chicerelli First Place in the inaugural Hack-a-Thon, which includes free registration to IT Nation 2017.

More importantly, integrating the solution is on this year’s Q1 to-do list at iVenture.

“We knew that, at the very least, we would be able to implement it in our own business,” Lekas said.

“We went in with that kind of mentality,” he added. “That’s probably why we won.”