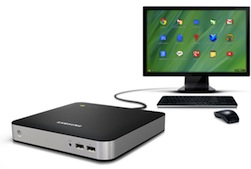 The VAR Guy is trading in his Ubuntu PC for a new Samsung Chromebox running Google Chrome OS. What motivated the move to a cloud-centric thin client? Here's the explanation.

The VAR Guy is trading in his Ubuntu PC for a new Samsung Chromebox running Google Chrome OS. What motivated the move to a cloud-centric thin client? Here’s the explanation.

First, a little background. Google Chromebooks are web-centric notebooks that run Chrome OS (a super-slim operating system) and leverage cloud software like Google Apps. More recently, Google has partnered with Samsung to launch a Chromebox — a $329 thin desktop (plus mouse, keyboard and monitor costs) that resembles a Mac Mini.

The VAR Guy has run Ubuntu Linux since July 2007 (he also runs Mac OS X and Windows 7 on sister systems). Ubuntu has proven reliable and efficient for productivity apps. But The VAR Guy has been too lazy to upgrade from Ubuntu 7.04 or so. The thought of learning new user interfaces, potentially adjusting drivers and so on isn’t all that appealing to our resident blogger.

What Is A Chromebox?

On the other hand, the thought of Google “maintaining” Chromebox and Chrome OS with automated updates sounds appealing. Admittedly, CNet’s ChromeBox review raises some concerns. But The VAR Guy is willing to give Samsung’s Chromebox a try. The thin desktop features:

The horsepower isn’t all that impressive. But the real power of Chromebox should come from the web… er, the cloud. The VAR Guy’s family will leverage Google Apps and other SaaS offerings, while Google essentially keeps the desktop up to date with automated software refreshes.

It sounds simple and compelling. But is it? The VAR Guy will offer continued updates once he boots up his first ChromeBox (in seven seconds) later this week…

And what will become of The VAR Guy’s PC running Ubuntu? Don’t worry. It will continue to hum along in The VAR Guy’s house, though not as a primary system.