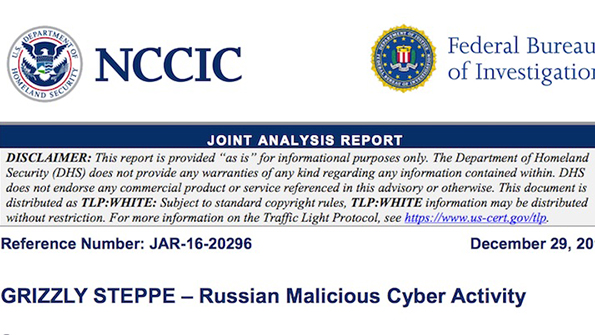 From spearphishing to social engineering campaigns, the intelligence operation dubbed “Grizzly Steppe” employed many of the same techniques evident in much less consequential cyberattacks.

The Russian hacking of U.S. political groups was carried out using many techniques that are all too familiar to MSPs and MSSPs, according to a new report by federal authorities.

In a Dec. 29 Joint Analysis Report (JAR), experts from the Department of Homeland Security and the FBI detailed how agents of Russian intelligence orchestrated a pair of attacks on “a U.S. political party.”

Of ongoing concern to network administrators, authorities say the groups routinely target many types of organizations around the world, and that the attacks are continuing, including one in the days after the Nov. 8 election.

Spearphishing was key to both attacks.

“In the course of that campaign, APT29 successfully compromised a U.S. political party,” the document continues. “At least one targeted individual activated links to malware hosted on operational infrastructure of opened attachments containing malware.”

“In spring 2016, APT28 compromised the same political party, again via targeted spearphishing,” the report states. “This time, the spearphishing email tricked recipients into changing their passwords through a fake webmail domain hosted on APT28 operational infrastructure.”

APT 28 and 29 are among dozens of actor groups linked to Russian intelligence, authorities wrote.

The report also contains several pages of recommendations for detecting and mitigating the threats, as well as information about how to report an attack to U.S. government authorities.

“DHS recommends that network administrators review the IP addresses, file hashes, and Yara signature provided and add the IPs to their watchlist to determine whether malicious activity has been observed within their organizations,” the experts wrote. “The review of network perimeter netflow or firewall logs will assist in determining whether your network has experienced suspicious activity.”