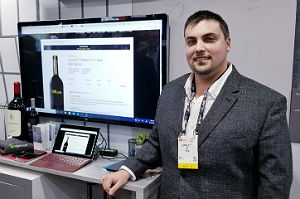 “They wanted to get all of their stores, their websites and their back office where they all take credit cards and payments and things like that they needed to get them on one platform that was compliant across all their channels,” he said. “To date, they say their direct to consumer sales are up 26%.”

A new fraud detection feature also is coming to Dynamics 365 to help improve loss prevention and account protection. Microsoft said a preview release of Dynamics 365 Fraud Detection is slated for release on March 2. Microsoft also introduced Dynamics 365 Connected Store, which will let partners implement AI from various Azure solutions to sensors and cameras, letting retailers measure activity and performance in their stores. A preview release is planned for later this year.

Microsoft also emphasized new capabilities for first-line workers in retail, an initiative the company launched at last year’s NRF show. In the forefront, was Microsoft Teams and a version targeted at workers in stores. Among the new features coming to Microsoft Teams for first line workers include the “walkie-talkie” feature to be included natively on Samsung’s forthcoming Galaxy XCover Pro, as reported last week. But the “walkie talkie” feature for Microsoft Teams will be available on any device and will appear in private preview during the first half of this year.

Also coming to Teams will be the ability for managers in stores or at corporate locations to manage daily workloads for workers in the stores using a feature called “tasks targeting, publishing and reporting. It will let managers create prioritized lists and create reports. Microsoft is also enabling Teams integration with retail workforce management systems, notably JDA and Kronos, to bring functions such as scheduling and attendance. Microsoft’s JDA connector for Shifts is an open source tool available on GitHub with a Kronos connector for Shifts slated to appear on GitHub this quarter.