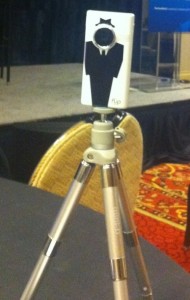 The VAR Guy is just about ready to visit Orlando, Fla., for the third consecutive week. Indeed, channel partner conferences are kicking into overdrive, and The VAR Guy -- armed with his trusty Flip video camera for FastChats -- is trying to retain remain the channel's ultimate road warrior.

The VAR Guy is just about ready to visit Orlando, Fla., for the third consecutive week. Indeed, channel partner conferences are kicking into overdrive, and The VAR Guy — armed with his trusty Flip video camera for FastChats — is trying to retain remain the channel’s ultimate road warrior. So, what’s on the agenda for March 2011? Here’s a sneak peek at upcoming channel partner conferences through March 2011…

First, a shameless plug: For the ultimate guide to 2011 channel partner conferences check out this lengthy list from The VAR Guy. Now, onto events worth watching now through the end of March 2011:

Feb. 27-28, Intel Solutions Summit, Las Vegas: Yes indeed, The VAR Guy will be blogging live from the conference. Our resident blogger wonders: Will there be any updates on the Intel Hybrid Cloud effort for channel partners? Also, will Eric Townsend be on hand to talk up some of Intel’s recent MSP-centric wins? Hmmm…

Feb. 28-March 3, Cisco Partner Summit, New Orleans: This is a strange year in IT. Most high-tech companies are feeling really good about sales momentum. Yet Wall Street is worried about Cisco. Can CEO John Chambers and the channel team provide some upbeat perspectives during Cisco Partner Summit 2011? The VAR Guy will be on hand to find out.

March 6-9, Xchange Solution Provider 2011, Orlando, Fla: Hosted by Everything Channel. Rather than infiltrate this well-known event, The VAR Guy will spend the week covering Everything Else Channel.

March 13-15: Channel Partners Conference, Las Vegas: Some well-known names from CompTIA to Gartner are on the Agenda. But can The VAR Guy stay out of the casinos?

March 19-26: Flying Solo: The VAR Guy’s wife will be away. Somebody remind our resident blogger to stop writing long enough to check in on his three young sons.

That’s all for now. The VAR Guy will be sure to offer some thoughts on April 2011 channel partner conferences… once our resident blogger completes travel in February and March.