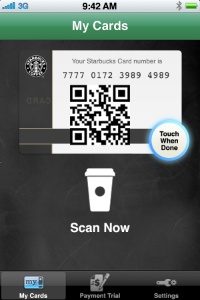 What does Starbucks have to do with the channel? Other than the fact that The VAR Guy takes his morning latte without fail, VARs may cash in on what might be a trend started by the coffee behemoth -- Starbucks has a rolled out a new nationwide service enabling users of iPhones and Blackberrys to pay for their caffeine fix via their smartphone. POS resellers and ISVs, particularly, stand to gain. Here's why ...

What does Starbucks have to do with the channel? Other than the fact that The VAR Guy takes his morning latte without fail, VARs may cash in on what might be a trend started by the coffee behemoth — Starbucks has a rolled out a new nationwide service enabling users of iPhones and Blackberrys to pay for their caffeine fix via their smartphone. POS resellers and ISVs, particularly, stand to gain. Here’s why …

The VAR Guy tried out the new service, which worked like a charm. After ordering, our resident blogger offered his iPhone to the Starbucks cashier, which she promptly scanned before asking the next person in line for her order. The customer didn’t reply — she was in a daze. Then she said, “Oh, I’m sorry — I just — he paid with his phone.” The VAR Guy smiled the coy, smug smile of a “how cool am I?” Apple user.

But you too, VARs, MSPs and partners, can have this sense of technological satisfaction, thanks to three simple letters: P-O-S.

Take POS one step further, however, and that’s where the channel has the potential to add even more value — the “cool” factor of enabling customers to pay with their phone. It’s a scenario The VAR Guy can play out in his head: a VAR pitches a POS system and closes the sale by saying, “… and customers can pay with their phones using a downloaded custom app.” The mobile payment system gives the business a differentiating selling point, added value to its customers and an Internet presence. And developers know it doesn’t take much to develop and iOS app these days.

There are even more possibilities — the iOS app could be a generic app that when launched allows the user to select locations that support the VAR’s implemented payment method. The owner of the business using the POS system could provide updates about the business via its POS system, providing end users with the latest news regarding their favorite places of commerce. Plus, developers could add even more features to the app, allowing users to keep track of transactions, coupons, payments on lines of credit with the business and more. Such a service can build customer relationships in a way other POS systems don’t.

Like credit and debit cards before it, the app implies a cashless transaction, which essentially could go faster than a credit or debit transaction since signing isn’t required, and those slices of time add up (The VAR Guy has had that experience on more than one occasion).

There are some who argue — and rightfully so — that RFID payments will do away with apps. But think about this: Apps on Android/iOS and Blackberry are deployed and used because they don’t require new technology. Essentially, any device with a screen can become a method of payment, and devices with a screen are pretty much ubiquitous these days.

The VAR Guy is excited about the prospects of this extension of POS technology, if for no other reason than because it will enable him to get his morning latte that much faster.