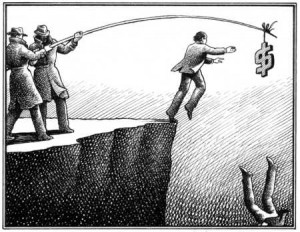 As Red Hat launches a cloud strategy and inks a deeper virtualization partnership with Cisco Systems, Red Hat CEO Jim Whitehurst has a cautionary message for VMware partners. Indeed, Whitehurst claims VMware over the next few years will suffer the same fate as Sun Microsystems. Admittedly, he didn't use those "exact" words -- but draw your own conclusions based on this report...

As Red Hat launches a cloud strategy and inks a deeper virtualization partnership with Cisco Systems, Red Hat CEO Jim Whitehurst has a cautionary message for VMware partners. Indeed, Whitehurst claims VMware over the next few years will suffer the same fate as Sun Microsystems. Admittedly, he didn’t use those “exact” words — but draw your own conclusions based on this report…

But will RHEV vs. VMware really repeat the RHEL vs. Solaris outcome? Hmmm… In this FastChat video, Whitehurst says channel partners are helping Red Hat to line up more than 500 RHEV customers in North America this year:

Within the video Whitehurst covers:

Still, competing against VMware won’t be easy. VMware has a huge following, a massive channel program, and plenty of customers who know vSphere can help to cut server hardware acquisition requirements while improving utilization rates.

The old Sun Solaris business model didn’t have that type of channel following — though Oracle (Sun’s current owner) is working to certify more Sun server and storage partners. Update, June 25, 2010: And Oracle says it has restored Sun to profitability.

But back to the story at hand. Eager to bolster its position, Red Hat has:

Cisco and Red Hat want to simplify datacenter deployments, and integration of the Cisco Unified Computing System Virtual Interface Card with the Kernel-based Virtual Machine (KVM) hypervisor included in RHEV helps visibility, control and consistency in a networked filled with virtualization, all without sacrificing performance, Red Hat and Cisco claim.

The entire  solution is expected to ready from both Red Hat and Cisco later in 2010 with the coming availability of Red Hat Enterprise Linux 6 related virtualization updates.

The VAR Guy thinks Cisco could give RHEV a lift, but it’s important to note Cisco also has a close working relationship with VMware.

Meanwhile, Red Hat Cloud Foundations is a new service offering for building and managing Infrastructure-as-a-Service (IaaS) and Platform-as-a-Service (PaaS) private and public clouds. Every offering includes cookbooks, expert services, training and easy implementation. The idea is to expand cloud technology and make it easier and more appealing to deploy one.

There’s a lot of strategic chatter in this blog post. But ultimately, the story boils down to this: Red Hat’s Whitehurst thinks RHEV will leapfrog VMware in the coming years.

That’s a lofty goal. The VAR Guy will be watching to see if Whitehurst can fulfill that prediction. And certainly, The VAR Guy needs to check in with VMware for their side of the story.