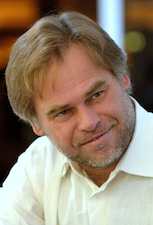 Does the operating system exist? Absolutely yes. Kaspersky will work with at least one organization, it sounds like a utility, to test a prototype in a simulated way. It’s based on a microkernel architecture that guarantees low risk of security incidents.

Will Kaspersky Lab productize the operating system? Not necessarily. The CEO seemed to suggest that there are no current productization plans in place. Think of it more as a platform that ensures security — though an actual “product’ has not been announced.

Will Kaspersky Lab open source the offering? Kaspersky offered a solid maybe. From his facial expression it looks like he’s given it some thought.

Will Kaspersky Lab seek government feedback? Yes. The CEO suggested that Kaspersky will let government partners view the source code so that they can be comfortable with the technology and offer feedback.

Will it support x86 and ARM processors? The CEO said the project will be hardware agnostic and easily portable. Another Kaspersky executive suggested a proof of concept will run on ARM tablets.

That’s all from The VAR Guy.