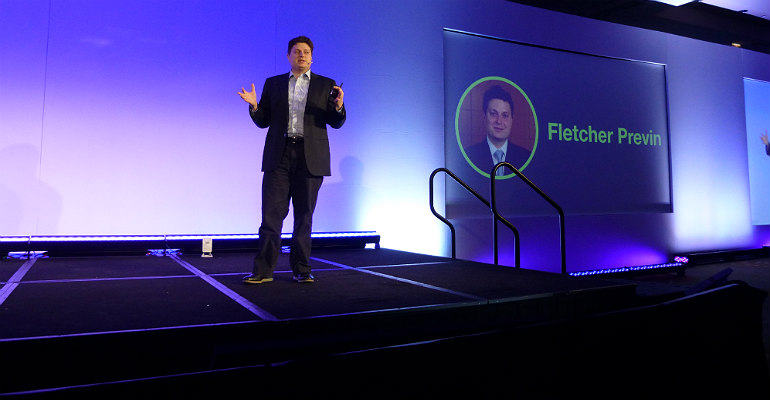 The move allows other businesses to use the same code and processes that enable the company's growing and successful Apple deployments.

(Pictured above: IBM’s Fletcher Previn on stage at the JAMF Nation User Conference in Minneapolis, Oct. 23.)

JAMF NATION USER CONFERENCE — Since 2015, IBM has been giving its 365,000 employees and 35,000 contractors around the world the choice between using Microsoft Windows PCs or Apple devices to do their work, based on their personal preferences.

Now IBM has chosen to share the core source code for that Mac@IBM initiative so that other businesses from small to large can create their own such Mac-at-work options for their own employees.

“People have asked about this over the last few years,” Fletcher Previn, the CIO of IBM, told Channel Futures at the Jamf Nation User Conference in Minneapolis, where several thousand of the Apple management vendor’s customers gathered to hear about Jamf’s latest products. Jamf customers and IBM clients have raised the idea of sharing IBM’s home-built initiative ever since Big Blue unveiled its Mac@IBM program in 2015, he said.

“Sometimes people would ask, ‘Do you think IBM will ever open-source this?'” said Previn. “IBM has a very long, dedicated commitment to open source, dating back to Linux. I started to investigate if that was something we could do.”

By releasing the code through the open-source repository, GitHub, IBM is again embracing the open-source software community and sharing code that has helped benefit the company’s employees around the world.

“It’s intended to be a mutually beneficial sharing,” said Previn. “We’re giving away the code that we’ve spent the last several years working on.”

To make the code easier to use, IBM developers added notes, comments and other useful documentation throughout the open-sourced project so that new users can get hints and help on deploying it for their own users, said Previn.

By downloading the Mac@IBM code, potential new users will still have to do work to tailor it to their operations and employees, said Previn, but it will make it easier for others to build upon and follow because it sets out a known path to success.

“You’ve got to do more than just use this source code if you are a large company, but whether you are a large company or a small one, this is a large accelerator for your own project,” he said. “The idea is that you’re trying to create an end-to-end process for people, so companies will need to add help desk, tooling and other functions to bring it all together. But certainly, we think this will help all organizations embrace user choice.”

As an option, companies that want help building and integrating their own employee choice programs using the code can hire IBM to help with the process, said Previn.

By September of 2018, about 134,000 Mac desktops and laptops have been deployed, as well as about 40,000 iPad tablets and some 90,000 iPhones, according to Previn. About 78 Mac and iOS support workers help those users around the world.

Following the success of its Mac provisioning and deployment program for employees, IBM also made major improvements in its Windows machine provisioning and deployment program, said Previn. As part of that process, IBM no longer installs operating-system and application images on Windows machines, but instead uses several other tools, including IBM BigFix, an endpoint manager, and Microsoft’s Intune mobile-device management application, to automatically provision new Windows machines.

“We have deployed 150,000 Windows machines without imaging,” he said.

Both initiatives are helping IBM to provide work devices to the company’s employees based on worker preferences.

“It’s a very big deal if you are passionate about enabling people to achieve their potential,” said Previn. “If I [were] running an orchestra and you were a clarinet player and I asked you to play the harp instead, it would be a big deal to you to switch. Every minute that people are grappling with an IT system is a minute they don’t spend on their actual job. The thing that makes them satisfied or fulfilled, that’s the thing they chose to do for a living.”

“Now we’re helping other companies deliver a great experience to their employees and demonstrating our commitment to developers and the open-source community,” he said. “We just really wanted to do this and thankfully, IBM was supportive.”