Since Ubuntu is such a large project, it can be hard to determine how you can help bring new users to the operating system. In my opinion, one of the best ways to help in the advocation effort is through Local Community Teams, simply called “LoCo” for short.

Evangelizing Ubuntu becomes much easier if you’re a member of a LoCo team. All you need to do is see the main LoCo site for teams in your state or province. 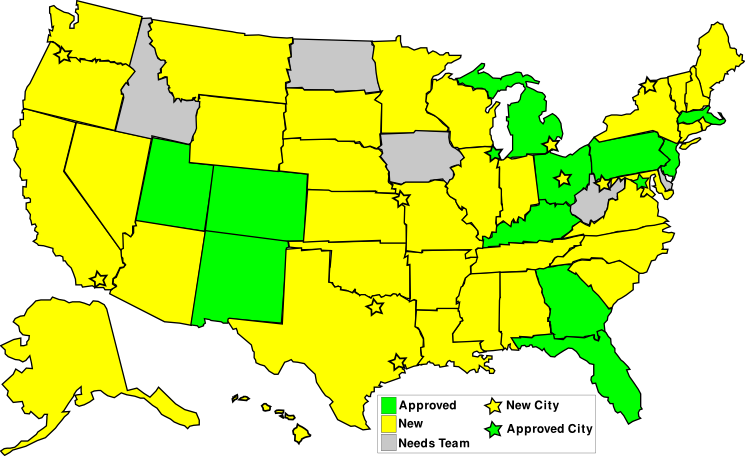 If there are none, you can always start one for your area, and other LoCo members will be glad to help you get started. In the map above:

But wait. You’re not done.

Once you become a LoCo member, it much easier to find ways to market Ubuntu. Personally, I have a CD stand at a local bookstore, which has an average of 350 CDs distributed a year. Others have used fliers, individual CDs, and even the internet to bring attention to Ubuntu. Your team might already have marketing options in action that you can use yourself.

No matter what you decide to do, you will be helping Ubuntu by creating interest in the project. You can pick whatever suits your schedule.

Events are another great way to bring users together. Events such as face-to-face meetings are common throughout LoCo teams. Since most collaboration is done online, it is refreshing to talk to team members and users face to face.

InstallFests are another form of event, where installations of Ubuntu are performed and presentations are often given. Going to these events can give you great insight to the overall direction of the team, as well as give you a chance to help out and get more work done that usually possible online.

Marketing is largely based on where you live, and to whom you plan to aim the system. Many cities have different laws and ordinances, so be sure to check with your local government before placing any fixed signs, posters, et cetera.

Think about who will be using the system, such as user base, age, and interests. All of which can be used for targeted marketing. Heck, you can even get an Ubuntu shirt and wear it around town. When people ask you what this “ub-un-tu” thing is, you can tell them in full confidence that it rocks.

Remember that you will have to break through the ever-falsified myths that Linux, and Ubuntu by association, is challenging to use. Sometimes a screen shot tells a thousand words!

The fact is, working with a LoCo can make your efforts easier and more successful. LoCo teams are something that is unique to Ubuntu. That’s right, no other system anywhere in the world has teams, comprised of volunteers, dedicated to bringing a system to new heights in their local areas.

I see LoCo teams and the dozens of other teams in the Ubuntu project as a major part of Ubuntu’s success, both as a distribution and as a world-class operating system. You will be amazed at what you can accomplish.