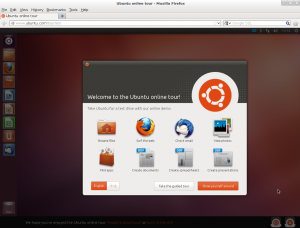 In most cases, “online tours” fall short of seeing the real thing. They’re convenient, but I can’t imagine many people buy a house or choose a college after only visiting them virtually. But when it comes to picking an operating system, online previews can work quite well, as the Ubuntu team’s online tour site exemplifies. If you haven’t checked it out yet, it’s worth a look — even if you don’t use Ubuntu.

Although it has been around since last fall, the Ubuntu online tour — which was developed by Canonical’s Web Design Team, under the leadership of Anthony Dillon — has received surprisingly little fanfare. Nonetheless, it provides a rigorous and impressively smooth preview of Ubuntu 12.04’s look and feel, at least in its default form. Here are a few screenshots:

Even the browser works!

But this is, of course, only a preview…

What’s coolest about this is, as the screenshots show, is that it’s all done right in the browser. There are no special downloads or other software required. As long as your browser supports HTML5, the online preview should work without a hitch right at http://ubuntu.com/tour.

The idea of showing off a more or less complete version of an operating system within an enclosed environment is nothing new, of course. In many ways the online tour is similar to the Windows 8 simulator, which appeared last year.

Yet the Ubuntu tour goes a lot further. It doesn’t just show off a new interface, but allows users — without any downloads — to run many of the applications that are installed by default. It lets them see, in the most powerful way possible short of actually sitting in front of an Ubuntu PC, that desktop Linux is not, in fact, the command line interface-bound monstrosity that detractors stereotypically depict it as.

Of course, there can be downsides to trying to show off an operating system within the limited environment of a Web browser, even one that takes full advantage of new technologies such as HTML5. Non-geeky users might not understand the restrictions of the preview, and assume that because they can’t perform tasks such as rename folders or connect their iPod in the online tour, those things won’t work in real Ubuntu either. Silly as it might seem to us technophiles, it wouldn’t hurt to spell out the inherent limitations of the online tour more explicitly, so that “normal” people don’t become confused.

All the same, this is a powerful tool for showing off Ubuntu, and desktop Linux more generally. Easy support for integrating it into the websites of localized Ubuntu groups, with translations to foreign languages if desired, makes it even more useful. On its own, it may not have the masses flocking to download Ubuntu, but it’s a sure step in the right direction.