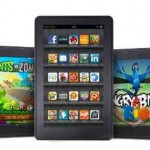 Amazon has finally launched its long-rumored and -speculated tablet, and delivering on all expectations

Amazon has finally launched its long-rumored and -speculated tablet, and delivering on all expectations. Lightweight, small, affordable and loaded to the gills with content, the Kindle Fire may be the hottest non-iPad tablet to ever hit the scene. Here’s why …

First, however, let’s look at Amazon’s latest fleet of Kindles: Two of them are touch-screen devices without a keyboard, while another has only a directional pad. That entry-level Kindle starts at $79, with Wi-Fi only, and the touch-screen Kindles start at $99. These new  Kindles will sell alongside their traditional keyboard counterparts, and they all use e-ink screens. Amazon said it endeavored to create cool products with affordable price tags, and it looks like the company has done it.

But the real crown jewel of Amazon’s announcement was the Amazon Kindle Fire, a 7-inch tablet running, as predicted, a super customized version of Android 2.3. It is completely integrated with Amazon’s cloud services, movies and music, and features a unique cloud-based web browser dubbed “Silk,” which leverages Amazon’s EC2 servers to actually do all the heavy web rendering and then spits the webpage back down to the device. Very nifty.

However, all that dependence on the cloud doesn’t mean the device is underpowered: The Kindle Fire features a dual-core ARM CPU from Texas Instruments and 8GB of local storage space. The whole thing weighs less than a pound and looks nearly identical to the BlackBerry PlayBook.

If you’re an Amazon Prime subscriber, the world of unlimited content is at your fingertips, but even if you’re not, there’s still a lot to choose from, and not much needs to be kept locally, thanks to Amazon’s cloud. There’s no 3G module in the Kindle Fire, which is likely why the price tag is only $199, but if the Fire had 3G, chances are it wouldn’t be free like the older Kindles. Also, there’s also no expandability with the Kindle Fire — the only slots are a 3.5mm headphone jack and a micro USB for charging.

Amazon has tried to make this a truly post-PC user device that’s easy to use right out of the box. In fact, Amazon will pre-load your device before it ships with your Amazon account, so you’re ready to go when it shows up at your door.

Amazon cut a few corners to achieve the $199 price tag. The touch screen only supports two simultaneous touches (not a huge deal), and users only have access to the Amazon Appstore (which is probably safer, anyway). The custom version of Android also will keep users inside Amazon’s ecosystem, so buyer beware — this is not a standard Android tablet to hack around with.

Still, at $199, the Fire’s closest competitor is the Barnes & Noble Nook Color at $249. And Amazon has built a killer tablet interface that should make all Android tablet manufacturers worry this holiday season. Amazon’s efforts to create a slick, no-nonsense, intuitive content-consumption device have definitely succeeded. All information on the Kindle Fire is easily accessible, plainly visible and stylishly appealing, even at a casual glance. I have yet to see an Android tablet achieve this. I truly believe this is the tablet the masses have been holding out for.

When Nov. 15, 2011, rolls around, and Kindle Fire starts shipping, expect them to be the hardest-to-find device for the holiday season. Compared to other 7-inch and 10-inch Android tablets, the Kindle Fire will prove an easy choice for consumers — if they can get their hands on one.

The tablet wars have truly heated up, and there are two contenders, as predicted. Apple’s iPad with the iTunes ecosystem and Amazon’s Kindle Fire with the Amazon ecosystem. This blogger fully plans on purchasing a Kindle Fire when the time is right. Expect a full review as soon as possible. It’s an exciting time to be part of technology, especially since once upon a time, the original Kindle cost more than the Kindle Fire does today …