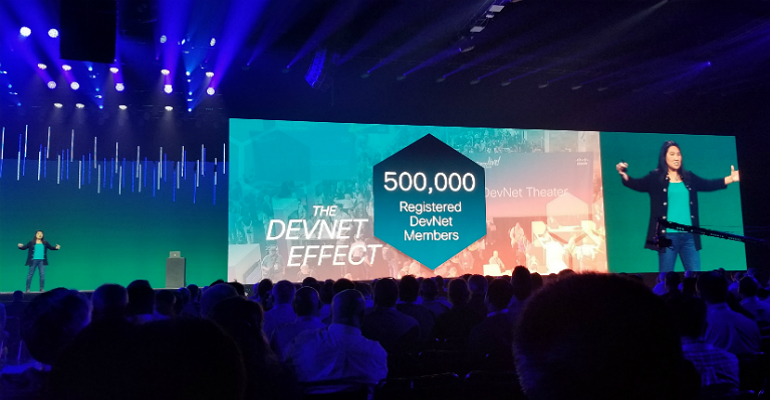 Cisco seeks to make its next-generation DNA Center network platform more extensible with the release of its APIs and SDKs to its DevNet community, which has now topped 500,000 members.

(Pictured above: Susie Wee, VP and CTO of DevNet, at Cisco Live, June 12.)

The move comes just one year after Cisco launched DNA Center, the intent-based networking architecture that is the company’s vision for the future of networking. It replaces the traditional approach of managing individual network components and nodes with a controller layer that can abstract any number of switches, routers, access points and even IoT endpoints into a common, software-defined infrastructure.

Cisco has stated from the outset its ambition to extend the reach of DNA Center to a broad ecosystem of partners. To do so, the company has signaled that making its new network accessible to developers is a core part of that strategy.

Over the past four years, Cisco has extended its outreach to developers with DevNet, a community of application, infrastructure, cloud and IoT developers; and network, IT and DevOps experts. The DevNet community now has exceeded 500,000 developers.

“We have hit critical mass in our ecosystem,” said Susie Wee, VP and CTO of DevNet, at Cisco Live.

By opening DNA Center’s APIs and offering tools and SDKs, Cisco said it is paving the way for those thousands of developers, many of whom have limited or no expertise in networking, to integrate the policy-aware network automation that is the crux of the DNA Center platform. Cisco said SDKs will bring multivendor support to DNA Center, allowing partners and customers to manage multiple networks as a single system.

The broadening of its developer outreach comes amid a rapid growth out of the chute for DNA Center. In the first three quarters since releasing it and the core Catalyst 9000 switch, Cisco last month said in its quarterly earnings report that it has sold the Catalyst 9000 to 5,800 customers, up from 3,100 in the prior quarter, making it the company’s fastest-ramping new product to date.

“The adoption of this architecture has blown us away,” chairman and CEO Chuck Robbins told attendees in his keynote address on Monday. “This can change the operational paradigm in organizations.”

It does so by letting developers program network calls as a common system using what Cisco calls its “intent-based” APIs, which are effectively network-aware applications. The release of the APIs, SDKs and developer tools sets the stage for partners to build new types of network-aware solutions that are increasingly necessary now that customer environments include a wide proliferation of mobile, SaaS, IoT and hybrid cloud solutions, and increasingly, applications that use big data, machine learning and artificial intelligence (AI).

“Our enterprise customers, with service providers, can build virtual, secure [infrastructures] where traffic moves directly to the destination with the network providing policy, security and traffic management,” Robbins said during a media briefing at Cisco Live. “That’s really at the heart of what we’re trying to build as a company right now.”

DNA Center’s programmable and automated infrastructure is aptly suited for a wide cross-section of partners seeking to build solutions that span the data center to the edge and even IoT endpoints, according to Cisco.

A wide array of partners ranging from systems integrators and ISVs to the growing cadre of digital service integrators will be able to build and deploy solutions that make a common set of network calls to DNA Center, once the company releases the APIs and tools this summer.

In one example, Accenture, which has a substantial ServiceNow practice, has enabled the entire process of upgrading Cisco IOS across thousands of routers using DNA Center.

“The old way of doing that would require command-line interfaces, maybe some lightweight automation,” said Gene Reznik, senior manager of ecosystem and ventures at Accenture. “Being able to sit down and methodically think through and orchestrate that across ServiceNow with DNA Center and have an effective way, with some rollback capabilities, I think is extremely powerful.”

Mike Machulsky, VP of sales at VeritechIT, one of Cisco’s digital service-integrator partners focused on the health-care industry, said the developer outreach is important.

“It’s immeasurably critical,” Machulsky said. “They are trying to be a broker to no matter where you want to run an application or a workload, and that’s where our clients want to go.”