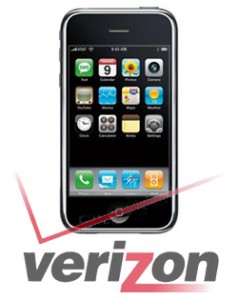 I've been downplaying the story forever as friends, family and co-workers ask me "So when does the iPhone come out on Verizon?" I typically respond with "Never" and explain  how Verizon uses a different style of signal than AT&T. As a result, Apple would need to build a new phone with a new receiver for Verizon's network. So I've dismissed speculation about a Verizon-oriented iPhone. Until now.

I’ve been downplaying the story forever as friends, family and co-workers ask me “So when does the iPhone come out on Verizon?” I typically respond with “Never” and explain  how Verizon uses a different style of signal than AT&T. As a result, Apple would need to build a new phone with a new receiver for Verizon’s network. So I’ve dismissed speculation about a Verizon-oriented iPhone. Until now.

Bloomberg has officially reported that the Verizon iPhone could be here as soon as January 2011:

“The device will be available to customers in January, according to the people, who declined to be named because the information isn’t public. Natalie Kerris, an Apple spokeswoman, and Jeffrey Nelson, a Verizon Wireless spokesman, declined to comment.”

Still, I’m optimistically skeptical at best. As a Verizon Wireless customer myself, it would be welcome, for sure, since I’m currently living in Camp Android with my Droid. Also, like the Bloomberg article points out, this would mean Apple could reach a greater breadth of customers not traditionally achievable in the past. It may also take a load off AT&T if many customers switch over to Verizon’s network potentially for better data plans or perceived reliability in their area.

Here’s the other side to this story. Verizon’s network notoriously doesn’t “do” data and voice at the same time and it’s something AT&T touts as their killer feature. For Apple, that would traditionally be a ‘step down.’ But Apple isn’t foolish enough to turn a blind eye to that market share they could scoop up. Realistically, to do this right, Apple would most likely have to have their own special announcement unveiling the “iPhone 4 for Verizon” and explain to customers that — no, voice and data don’t happen at the same time — but the pros outweigh the cons. And like any other smartphone — voice and data can always happen at the same time, so long as you’re WiFi enabled.

Bottom line? It still sounds like pure conjecture to me. But I’d love to be wrong.