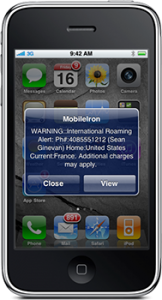 MobileIron launched its first mobile device management (MDM) and security solution just three years ago when many businesses were still resistant to letting Apple iPhones onto the corporate network and iPad had not yet been announced. What a difference three years make.

MobileIron launched its first mobile device management (MDM) and security solution just three years ago when many businesses were still resistant to letting Apple iPhones onto the corporate network and iPad had not yet been announced. What a difference three years make. The company has added 2,000 customers in the last 18 months alone, and recently was named a “Leader” in the Gartner Magic Quadrant for MDM. It’s raised a total of $97 million in funding with $40 million of that coming in May and earmarked for core development and global expansion.  MSPmentor caught up with Ojas Rege, MobileIron’s VP of strategy. Here’s what he had to say.

Rege says that MobileIron is a 100 percent channel organization with partners that include systems integrators, VARs and managed service providers (MSPs). The company was founded on three fundamental beliefs – that it must support multiple mobile OSes, that apps and data would be more important than voice, and that it’s a consumer world.

“It was actually a lot of evangelism back then,” Rege told me.  “A lot of enterprises said they wouldn’t let iPhone in.” But now the world has changed to the point where there’s a whole new segment that MobileIron calls mobile IT. Enterprises are talking about more than just management. They are also talking about apps. Mobile IT encompasses a whole new skill set that includes privacy, security and management from the OS to the apps.

Rege says that enterprises are all likely to make their big decisions on platforms and MSP partners in the next 12 months and partners must be ready.

“Customers need it now. If they can’t get a service from their traditional partner, they will get it from someone else,” he said.

And here’s a look at how quickly customers are embracing this technology. At MobileIron’s user conference earlier this month in San Francisco, over 50 percent of the 200 customers attending had deployed at least one internal application. Seventy percent had established a BYOD program. Fifty percent were deploying android actively (at a lower volume than iOS, however), and some were involved in BlackBerry to iOS migrations.

MobileIron offers customers three ways to install its solution (all sold through the channel):

Rege says the company’s focus in the next six months will be on apps. Customer apps are growing ever bigger, with some that are as large as 13G.  Downloading apps like that could crush a corporate network, so MobileIron is partnering with Akamai on an application delivery network that offloads the provisioning of the network to Akamai’s globally distributed network. That lets organizations deploy big apps to as many devices as they want to without impacting their own network.

Other focuses will be further securing email attachments (so they don’t end up in DropBox) and more Android support.