MOBILE WORLD CONGRESS — Microsoft has taken the wraps off of its new HoloLens 2 commercial 3-D headset, a new developer kit for its Kinect sensors and new Dynamics 365 AI tools, designed to simplify the delivery of “augmented reality” solutions.

Introduced Sunday on the eve of the annual Mobile World Congress (MWC) in Barcelona, the new HoloLens is a significant upgrade over the inaugural version of the software giant’s headset that includes a holographic computer, letting users view their surroundings in 3-D with holograms.

HoloLens 2 will arrive in the second half of this year as a more comfortable and flexible headset with significantly improved visualization and double the field of view, Microsoft officials said during a launch event at MWC. The company also is expanding its ecosystem and tools to bring new solutions to market. The enablement efforts will touch on software developers, ISVs, integrators and vertical solution providers. 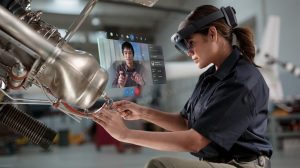 Microsoft aims to make it easier to integrate HoloLens with its own offerings, notably in the planned April semiannual update to Dynamics 365, which will include new AI-enabled point solutions. For example, Dynamics Remote Assist will enable HoloLens to provide remote troubleshooting by adding visualization of the scenario.

In addition to providing deeper integration with its own software, including Microsoft Teams and Power BI, Microsoft also is opening HoloLens to an expanding ecosystem of partners including Mozilla, which is enabling support via the Firefox browser (currently the Windows 10-based HoloLens requires Edge).

HoloLens 2 headsets will cost $3,500. Though formidable, Microsoft officials said that’s less expensive than the current model, which carries a $5,000 price.

Among the notable improvements to headset and its embedded holographic computer, HoloLens 2 will have a new display engine that will double the 3-D headset’s field of view, while maintaining the 47 pixels per degree of sight, which is critical to view text as small as eight point. 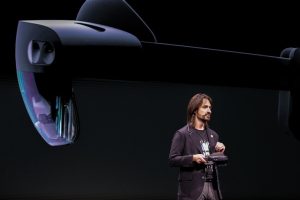 “This is the equivalent of moving from a 720p television to a 2K television for each of your eyes; no such technology exists in the world,” said Microsoft technical fellow Alex Kipman, speaking at the launch event.

Besides the improved field of vision, HoloLens 2 will use new sensors with embedded AI and semantic understanding, including support for Windows Hello authentication. Microsoft also said HoloLens 2 will offer more precision; for example, when viewing something, it will better understand the user’s intent and render the holograms in real time.

In addition to the improved capability, Microsoft said HoloLens 2 is lighter and more comfortable than its predecessor. It’s manufactured with a lighter carbon fiber material. Along with various other improved ergonomics, including a flip visor, Microsoft said the new headset will better lend itself to …