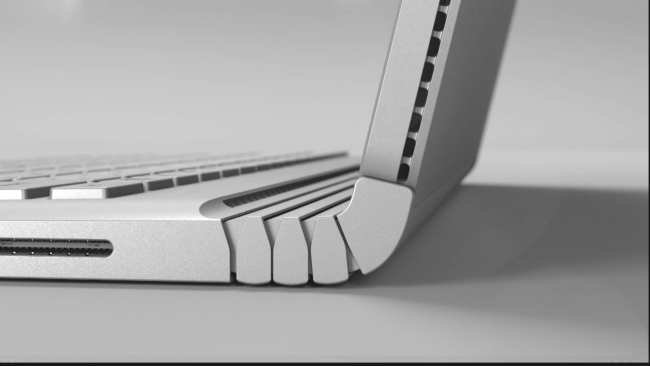 Microsoft earlier this week unveiled new Surface, Lumia and Band devices but without question the star of the show was the vendor’s first-ever laptop dubbed the Surface Book.

Microsoft (MSFT) earlier this week unveiled new Surface, Lumia and Band devices but without question the star of the show was the vendor’s first-ever laptop dubbed the Surface Book.

“With Windows 10 and these new Microsoft devices, you are at the center of magical new experiences,” said Satya Nadella, Microsoft chief executive. “We’re moving people from needing to choosing to loving Windows, and these devices promise to fuel even more enthusiasm and opportunity for the entire Windows ecosystem.”

The 13.5-inch Surface Book, which already has drawn rave reviews, features both pen and touch input, sports 6th generation Intel (INTC) Core i5 or i7 processors and up to 12 hours of battery life. The unit also functions as a hybrid convertible, with a detachable screen that can be used like a clipboard. Microsoft priced the Surface Book at $1,499 to start.

Microsoft also rolled out the Surface Pro 4 and again positioned it as a laptop replacement particularly for business customers. The tablet is 8.4 mm thin, features a 12.3-inch PixelSense Display and runs on Intel Core m, Core i5 and Core i7 processors with battery life up to 9 hours. The Surface 4 is priced starting at $899.

The Surface Book, Surface Pro 4 and new accessories are available for preorder in select markets Oct. 7, then for purchase in Canada and the United States on Oct. 26, with additional markets to follow.

As expected, Microsoft also offered up two new smartphones, the Lumia 950 and Lumia 950 XL, the first Windows 10 Lumia phones. The handsets include PureView cameras with 20-megapixel sensors, triple LED natural flash and 4K video capture. Both the Lumia 950 and Lumia 950 XL will become available in select markets in November. Microsoft did not set any pricing, leaving it up to local retailers or telecom operators to establish prices and availability.

Microsoft also introduced the Lumia 550, which it positioned as the most affordable 4G LTE smartphone running Windows 10, priced at $139. The Lumia 550 will begin rolling out in select European markets in December, with additional markets to follow.

In addition, the vendor unwrapped the Microsoft Band 2, featuring a new curved display, with functions that enables users to reply to texts or set reminders with the touch of a button. The device is priced starting at $249, and will be available for preorder in select markets Oct. 6, then for purchase in the United States on Oct. 30, with additional markets to follow.

And, Microsoft offered Xbox One users a free update featuring a complete redesign built on Windows 10. The upgrade, which will launch in November, features backward compatibility that enables users to play Xbox 360 games on Xbox One for free with 100 games at launch and hundreds more in the months ahead.

In the U.S., Surface Book, Surface Pro 4, Lumia 950, Lumia 950 XL, Microsoft Band 2 and Xbox One will be available through microsoftstore.com, some 110 Microsoft stores, authorized resellers and select partner retailers.