Microsoft officially unveiled its rebooted Surface Hub with help from Steelcase and APC.

(Pictured above: Microsoft’s Panos Panay shows off the new Surface Hub 2S at an event in New York City, April 18.)

The reboot of Microsoft’s Surface Hub conferencing and collaboration hardware will arrive in the U.S. this June with a thinner and substantially improved active touch, 4k display and eagerly awaited integration with Office apps and Teams.

Microsoft on Thursday officially launched the new Surface Hub 2S during a media event at the New York City office of Steelcase, the commercial furniture supplier and partner that developed a unique stand that allows workers to easily move the machine among different conference or huddle rooms. Also revealed was the pricing. A complete Surface Hub 2S will cost $9,000, plus $1,500 for the custom-designed Steelcase Roam, also introduced at the event and slated for distribution through IT channel partners via Ingram Micro, Tech Data and Synex.

Both Microsoft and Steelcase emphasized the mobility aspect of the new Surface Hub 2S, and forthcoming models, as a prerequisite of modern work environments.

“Move it down the hallway, you want to keep your team in flow,” said Panos Panay, chief product officer of Microsoft’s Surface group, speaking at the New York City launch event. “You can use it anywhere, bringing people together from anywhere, no matter how or where they want to work; it can happen on this product and it is absolutely gorgeous.” 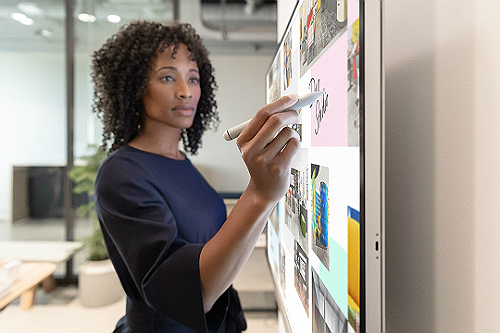 The new Surface Hub 2S weighs 61 pounds and has a 50-inch screen.

At 61 pounds, the new system’s 50-inch display is 40 percent lighter than its predecessor with narrow bezels and powered by an Intel 8th Generation Core i5 processor, 8 GB of RAM, Wi-Fi, Ethernet and Bluetooth interfaces, as well as several USB-C ports, a 4k camera, a subwoofer and three front-facing speakers. Panay emphasized the improved touch display has better contrast and faster response and can render up to 9.8 million pixels. Likewise, an included pen and improvements to the Microsoft Office Whiteboard app will allow meeting participants to annotate with digital ink.

Microsoft also previewed a prototype of an 85-inch version set for release next year. Behind the scenes at the event, engineers demonstrated the 2X, an upgrade slated for next year that allows users to pivot from landscape to portrait mode. Early adopters of the Surface Hub 2S will be able to upgrade to the forthcoming 2X by swapping out a modular cartridge that the engineers displayed.

While it has a 128 GB SSD, it’s not designed for local storage and no data is left on the system, for security purposes. It runs Windows 10, the Microsoft Edge browser and can run Universal Windows Platform (UWP) apps. It runs Office apps including the improved Microsoft Whiteboard, which now includes support for PDFs and is optimized for conferencing using the Teams interface. It doesn’t natively support third-party conferencing such as Zoom or Cisco Webex, though a user can connect another PC to the system through its Display Port interface.

Microsoft first demonstrated a prototype of the revved Surface Hub at last fall’s Ignite conference. At the time, the  company only promised the 2S would arrive sometime this year. Panay emphasized the improved touch and digital inking experience and the notion that it is designed for ideation.

“We’ve actually taken the sensor layer of the product and we’ve  layered it into the display itself,” said Panay. “This is critical because …