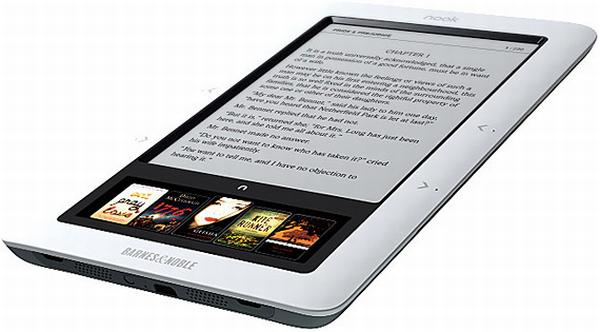 5 Minutes With The Nook: A Shoot From The Hip Review

Full disclosure: I own an Amazon Kindle 2. I've had it for 3 months now, and I can't really say enough good things about it. It's a solid piece of technology that'll be there for me for years to come. With the recent firmware update that included PDF support and extended battery life with wireless Whispernet on, it's golden. Two weeks of continuous use with the wireless off, seven days with it on.

Full disclosure: I own an Amazon Kindle 2. I’ve had it for 3 months now, and I can’t really say enough good things about it. It’s a solid piece of technology that’ll be there for me for years to come. With the recent firmware update that included PDF support and extended battery life with wireless Whispernet on, it’s golden. Two weeks of continuous use with the wireless off, seven days with it on. So how does that compare to the Nook? Here are some thoughts.

First, a little background. I realize you may not “resell” a Kindle 2, Nook and other ebook readers to your customers. But I think it’s important for VARs to keep an eye on emerging form factors, user interfaces, connectivity approaches and so on.

So here are my thoughts on the Nook vs. The Kindle 2.

First off, Kindle 2 slaughters the Nook in battery life. The Nook is rated 10 days with wireless off, only 2 if it’s on. But there’s more to it than just battery life…

The Nook was on display at my local Barnes and Noble. I played around with it for a bit, but surprisingly, it didn’t turn any heads. In fact, I almost didn’t notice the demo unit there. There was something sadly unremarkable about it. But let me be the first to admit, the Nook has some advantages. It has a user replaceable battery, upgradable flash memory, and of course, the touch screen. Now, I don’t particularly find the touch screen to be an advantage for actual e-book reading, but as a self-confessed hacker, these images of Android, Pandora and some web browsing running on the Nook get me really excited.

But I think the buck stops there. That’s it. It’s oh-so exploitable and fun for hackers, but for the person who just wants to sit back, relax and read e-books…it’s not the easiest thing to use, or the most comfortable.

The unit is priced at $259, the same price point as the Kindle 2. But it feels like it should be about $100 cheaper. The entire unit is plastic. It’s lightweight, but it also feels like something from Fisher-Price. And the plastic is what leads me to the next issue: the Next Page and Back Page buttons. Anyone who’s seen a Kindle knows the aluminum backing comes flush with the plastic front. The front buttons for page turning are neatly outlined and have a solid “click” to them. No accidental pushing here. However, the Nook’s buttons are not outlined at all. They’re merely suggested by a darkened embossed < or >. The inside of your palm can awkwardly click the next page since the buttons are much ‘softer’.

Most people are comfortable with their hands mid-height on book, which lends itself to putting controls where your thumbs naturally rest (a-la the directional pad on the Kindle). But other than page turning, Nook navigation takes place on the touch screen. Everything from book changing, selection and interaction. And it’s not exactly comfortable. And it’s not exactly snappy.

David Pogue called the software “half-baked” and I’d have to agree with him. Instead of easy menus to do what you want, it requires a plethora of selections and options. I wanted to change the font on the screen. This required me to hit the “Nook” button (like the iPhone / iPod button), choose a font option, which then gave me a list of fonts to choose from. After picking a font, I had to pick a font size, from about six. They were labeled Extra Small to Extra Large (but gave no indication how big or small they’d be). And maybe that doesn’t sound so bad, but the issue was the time lag between the screens. It wasn’t long, but it felt unresponsive, and  unpolished. It was just the right amount of time to make you wonder if you tapped the screen at all, and just when you’d go to tap it again, it turns out it registered the tap. Comparatively speaking, there’s one button on the Nook for font size. You click it. You thumb up and down through six visual representations of how big the font will be. Click. Done.

The screen-by-screen approach (like options on the iPhone / iPod) is nifty, and looks great, but it’s not practical. And the novel concept of the Nook is where I think it fails the most. It’s doing too much. Sure, the touch screen shows you color pictures of your books, and yeah, it’ll show you the MP3’s you’d like to play. But it fumbles. It’s clunky. That’s not to say it isn’t intuitive, it just doesn’t feel right on the tiny touch screen. To boot, anyone typing out letters to search through an indexed book will have to enable the keyboard mode. This also means that quickly scrolling to a word for a definition is a more involved process than simply using a direction pad like the Kindle. So while the screen does many things, it almost does too many things. And with all the fancy technology in the book, it fails to do the one thing that geeks love about the Kindle. The web browser. There is none. So that means you wont be looking up anything on Wikipedia anytime soon.

I won’t get into book selection or subscription services. That nonsense can go on for hours, and realistically, it’s nothing neither party can’t add with a firmware update or a partnership with a magazine company. The e-ink screens are identically, so image quality isn’t up for grabs.

I suppose at the end of the day, you have to ask yourself why you want an e-book reader. Do you want it to read some pop lit and then listen to MP3’s, or are you a hardcore book fanatic, looking for a quick way to navigate and consume as much literature and knowledge as you can? If you’re looking for the closest and most comfortable analog to reading a real book, you’d best stick with a Kindle.