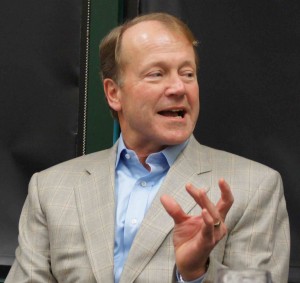 The big question: Can Cisco Systems -- and Cisco partners -- continue to command premium prices as rivals like Hewlett-Packard push hard into the networking market? Cisco CEO John Chambers says the conversation with customers isn't about price.

The big question: Can Cisco Systems — and Cisco partners — continue to command premium prices as rivals like Hewlett-Packard push hard into the networking market? Cisco CEO John Chambers says the conversation with customers isn’t about price. Instead, Chambers says even the most price-conscious customers — businesses like Wal-Mart — are willing to pay a premium for solutions that deliver true business value. Chambers covers that point — and more — in this FastChat Video.

First, a little background: Chambers and Executive VP Robert Lloyd held a press briefing at Cisco Partner Summit on March 1. During the one-hour-plus briefing, Chambers and Lloyd discussed the new Cisco Cloud Partner Program and a range of additional topics — including strategies in SMB, the Middle East, market inflection points, and the competitive landscape.

The following FastChat Video includes pieces of the conversation — particularly:

No doubt, Chambers continues to speak with confidence. And generally speaking, channel partners at the conference sound upbeat about Cisco’s data center, virtualization, video and collaboration efforts. Still, Chambers has spent recent weeks adjusting Wall Street’s expectations amid an IT spending slowdown in the government market.