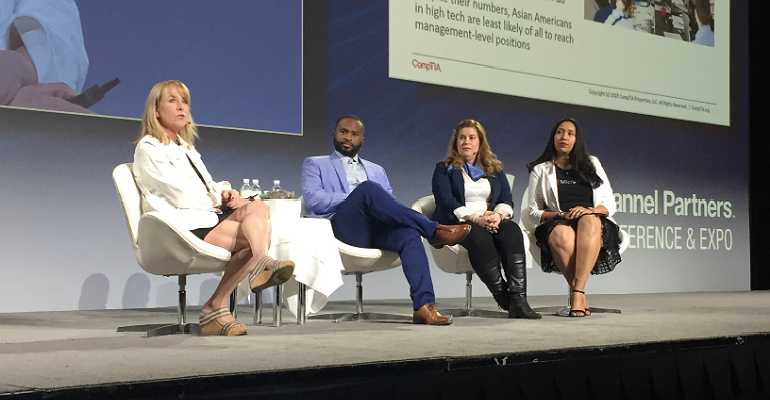 Is Your Innovation Bias Hurting Your Bottom Line? Probably

At the Channel Partners Conference & Expo, a group of panelists tackled the elephant in the room: diversity.

If you think your company or your vendors’ organizations are doing a good job with diversity initiatives, odds are you’re sadly mistaken.

According to statistics from industry research firm CompTIA, more than 75 percent of companies in the high-tech industry say their organizations have adopted a progressive approach toward diversity initiatives; however, as a panel at last week’s Channel Partners Conference & Expo showed, the reality is that tech lags woefully behind.

“People have a fairly delusional view of how their company is doing in respect to diversity,” said CompTIA senior director of industry analysis Carolyn April, who moderated the panel.

Numbers from the Equal Employment Opportunity Commission support CompTIA’s findings, showing that compared with overall private industry, the high-tech sector employed a larger share of white workers (68.5 percent vs. 63.5 percent), Asian Americans (14 percent vs. 5.8 percent), and men (64 percent vs. 52 percent). Conversely, the industry boasts a significantly smaller share of minority groups, with about half the number of African Americans and Hispanics and about one-quarter less women.

Why is tech lagging behind? It isn’t intentional, said the panelists. It’s simply a matter of unconscious bias.

“People do business with people they know and like,” said Aaron Leveston, co-founder of Channel Next and national account manager at RingCentral. “It’s no different when it comes to hiring practices. It’s not some nefarious plot.”

There are some big names in tech working to broaden their understanding of diverse populations such as women and minorities in order to become more inclusive — and some recent initiatives hold promise. Graciela Perera, associate professor of computer science at Northeastern Illinois University, recently joined Google’s Faculty-in-Residence program, which aims to reach faculty outside of the Ivy League hunting grounds traditionally favored by human resources.

“They’re grabbing faculty not just from top institutions, but state schools,” she said. “They bring [us] to Mountain View to better understand what are [our] needs, how to better prepare our students, and for them to understand our students and our perspective as well.”

But waiting until students are at the university level to get them interested in tech might be too late. Leveston has two daughters, seven and eight years old, and resides in a competitive school district. He said administrators are deciding on certain career paths for kids as young as third grade based on their test scores.

“If we’re waiting on colleges or high schools, that’s a pretty late age to get these guys engaged,” he said.

Many of Perera’s students are excited to go into the tech industry, but they worry about the culture. Thirty percent of Northeastern’s students are Hispanic, she said, and they’re concerned that the tech culture won’t be supportive of their desire for work-life balance and social values.

“They have family, a job and their studies,” she explained. “They want a balanced life outside of work. Are there employee resource groups? Events? Sports? They’re excited, but once they get in, how do you keep them excited?”

Until now, diversity initiatives have largely fallen to human-resources departments that tend to focus on hiring quotas and other KPIs that oversimplify the issue and focus on recruitment over retention. But to see the diversity issue as solely an HR problem is missing the forest for the trees, said the panelists.

“It’s a business imperative,” said Leveston. “I regularly sell myself as an African American male that has unique experiences tailored to that community. You may want to talk to me about how to tap that market, because I may have insight you may not have.”

What’s more, the lack of retention initiatives leads many tech workers from marginalized groups to feel like a fish out of water once they get into the field. April said the “bro culture” of tech and the channel especially alienates women, who find themselves uncomfortable in a tech workplace.

The lack of role models for women and minority groups is another contributing factor, said the panelists. April points out that the Ginni Romettys and Meg Whitmans of the world are the rare exception, not the rule. Mentorship and advisory groups are critical to making these populations feel empowered in the industry.

Ultimately, said Jones, diversity is not just about people — it’s about product. If OEMs and partners don’t build products and services that are attractive to diverse populations, they’re missing out on a big chunk of potential revenue. She called this shortsightedness “innovation bias,” and explained it’s hurting partners’ bottom lines.

“Most people think when they hear the words ‘diversity’ or ‘inclusivity’ that it’s all about person, color or gender, but it goes much deeper,” Jones explained. “It’s about … if that product really has a focus group that included a lot of diverse thoughts.”

When the same group of people is designing and updating every product and service the channel deals in, innovation stagnates and marginalized demographics continue to be unsatisfied. The onus can’t just fall on OEMs. As partners package, market and deliver their own IP and customized solutions, they should be actively working to make sure they aren’t falling into the innovation bias trap. Otherwise, they’re doing a big disservice to their own bottom lines.