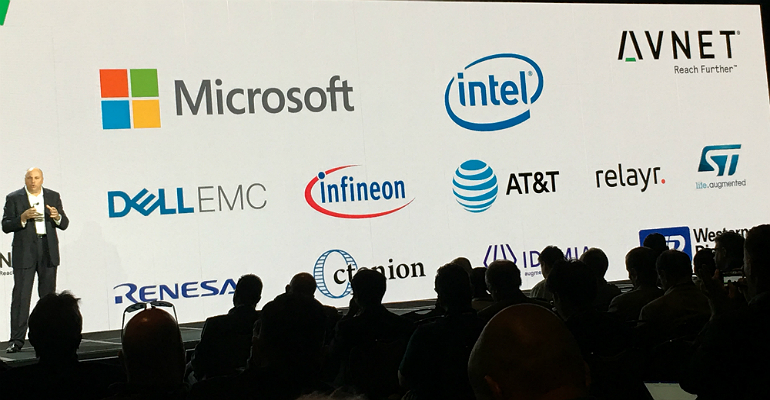 Channel Carves Out a Role in IoT World

(Pictured above: Avnet’s Lou Lutostanski on stage at IoT World in Santa Clara, California, May 15, 2018.)

IOT WORLD — A giant tech storm called the internet of things (IoT) has been building off the coast of commercial and industrial markets, and now it’s finally looking to make landfall. At least this was the theme at IoT World in Silicon Valley this week.

For systems integrators, high margins await those that can help companies get ahead.

“There was a lot of interest in industrial IoT at this year’s event,” says Terje Gloerstad, CTO at AuthorityData, an IoT integrator specializing in the insurance industry. “That’s where you’ll see the big contracts, long-term deployments, where most of the money is going to be made.”

Signs of a maturing industrial IoT market came into sharp focus during the wee morning of the first full day at IoT World. That’s when Charles Reed Anderson & Associates, an IoT advisory services firm, unveiled its latest research showing that senior managers (just below the C-suite) are starting to see what IoT can do for them.

Charles Reed Anderson found that only 14 percent of executives say lack of senior management support is their top IoT implementation challenge; in years past, this was often cited as the biggest hurdle, Gloerstad says.

In fact, the IoT landscape is littered with failed pilot projects that didn’t have senior management buy-in — that is, many were funded by the innovation team, not the line-of-business executive with profit-and-loss responsibility.

“The C-suite is maybe nine months to a year ahead of the rest of the company,” Gloerstad says. “But you’re starting to see use cases with clear value propositions, ROI on implementations, maturing market vendors, and senior management starting to understand the value that IoT can bring.”

In another sign of maturing times, U.S. companies have turned their gaze from sexy hardware to serious analytics. They’ve figured out that IoT isn’t about the connected device so much as the data, analytics and insights gained from it.

Compare this to their Asian counterparts that lag behind.

“A lot of insurance companies wanted to talk directly to the hardware vendors, but it’s the small piece of the solution,” Gloerstad says. “This change from a hardware focus to data and analytics shows that there’s some maturity going on in the market. Customers are starting to look at the right things.”

Channel companies can ride the maturity curve; in fact, more than half (57 percent) of executives in the Charles Reed Anderson survey said their top IoT implementation challenge was vendor integration, followed closely by cybersecurity and privacy (56 percent), and upfront costs (56 percent).

An IoT project has many moving parts and practically screams out for a systems integrator to put it together. Armed with existing vendor relationships and a battle-tested methodology, integrators can act quickly and reliably in every phase of the project

Most of all, they can be the voice of reason in a sea of complexity.

“A lot of people talk about the fact that IoT takes 10-20 people for a full implementation,” says Lou Lutostanski, vice president of IoT at Avnet, speaking at IoT World. “The more people involved in the implementation, the riskier the proposition.”

Lutostanski says a channel partner heading an IoT project can consistently answer some of the biggest questions: What’s the value proposition? How does it flow through the whole system? What is everybody’s roles? How does margin get assigned?

However, not everything at IoT World painted a rosy future.

Among Charles Reed Anderson research, Gloerstad saw a stat that raised his eyebrow. Only 12 percent of IoT initiatives involve end users as stakeholders; the end user in this case is not the C-suite executive nor the senior manager, but the actual user.

Without the end user, an industrial IoT project can quickly derail.

For instance, in a smart building, the end user is the building manager who receives an alert that a water leak has been detected on the fifth floor. Does the building manager have enough information about the location and nature of the leak – is the leak in a bathroom? – to call the right person to fix the leak?

“In this scenario, it can be very valuable to get the building manager involved,” Gloerstad says. “But most of this is technical people talking to technical people, with very little involvement from the end user. That’s pretty scary.”