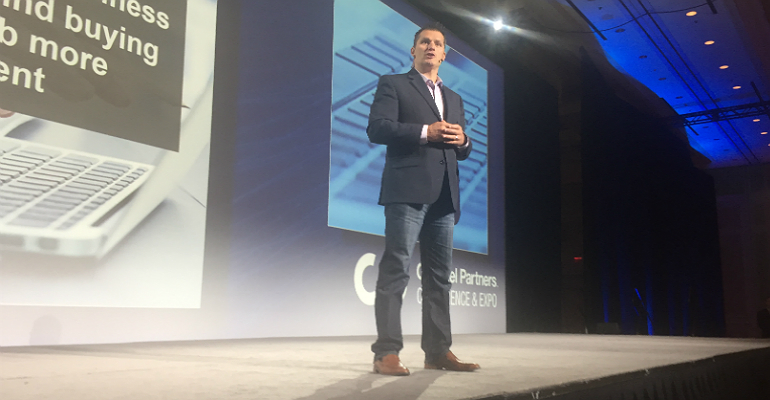 Lots of challenges face traditional channel companies, but rich margins await those that can overcome them.

CHANNEL PARTNERS CONFERENCE & EXPO — Taking center stage inside a vast ballroom at the Venetian and Sands Expo in Las Vegas, Jay McBain, principal analyst at Forrester, told attendees at the Channel Partners Conference and Expo on Wednesday precisely what they didn’t want to hear.

Big changes are coming to the traditional channel: Line-of-business (LOB) executives without relationships to channel partners have seized the tech-buying reins. Savvy customers demand hypertargeted solutions. New “shadow” competitors are storming the market and winning deals. And traditional channel CEOs unable to lure millennials to succeed them are looking for the exits.

So it’s somewhat surprising McBain began his keynote with a good deal of optimism.

“I’m excited to be in front of you,” he says. “This is the most important industry.”

What’s going on? First, the bad news: Channel partners spent decades nurturing relationships with the CIO and IT department, not the LOB — the new shot-caller in tech. Much of a channel partner’s market positioning and sales tactics have been honed to appeal to the technical decision maker.

Only a few years ago, 10 percent of tech buying decisions happened outside the IT department. LOBs fed up with the CIO’s slow-or-no approval process found ways around it — an outlier practice known as “shadow IT.” This has flipped.

“Today, two-thirds of [all] technology decisions [are] made outside the IT department, and this number will be 80 percent in the next couple of years,” McBain said. “In a third of these cases, [LOBs] are blocking IT from even being involved.”

In another blow to the channel, many LOBs prefer working directly with vendors and new kinds of solutions partners, McBain said. They actively avoid the old ways of buying tech, preferring to self-research products and shunning traditional channel partners.

McBain says his research shows that LOBs also don’t believe traditional channel partners specialize enough to help them achieve their desired business outcomes. The days of the generalist are over, he says, and the era of hyperspecialization has begun.

It’s much more than specializing in, say, health care. For example, a vice president of marketing at an ambulatory care clinic with 50 doctors in upstate New York doesn’t care about a channel partner with experience at big hospitals or small dental offices. Rather, this LOB is looking for an average of seven apps to drive more patients in the door and wants a channel partner with intimate knowledge and a track record of integrating them.

Now for the really bad news.

McBain has identified a host of new companies – which he calls, the “shadow channel” – competing with traditional channel partners. They might be startups willing to give product and services away to gain customer traction and score the next round of venture capital.

Or they might be accounting, legal or digital marketing agencies getting into the IT services game. McBain says there are roughly 150,000 CPA firms offering technology services in North America, and nearly the same number of channel partners.

“This is a massive group coming into technology and looking to win that downstream revenue,” McBain said.

Independent software vendors (ISVs) are another part of the shadow channel. Some 100,000 ISVs build specific offerings today, compared to only 10,000 a decade ago.

“My prediction is that, 10 years from now, there will be 1 million,” McBain said. “Many people in this audience either have or are thinking about putting their IP into code and converting into a software company.”

It’s no wonder channel-company owners are looking for the exits. The average channel-partner owner is in their late 50s. Today, there are 162,000 channel partners in North America, McBain says, and 40 percent of owners plan to retire in the next six years without a succession plan.

“The broader channel is aging out,” McBain says. “We’re not having a funnel of new people come in and start companies fast enough to replace those that are retiring.”

But there’s a silver lining to all of this: sky-high margins.

In the example of the ambulatory care clinic, a hyperspecialized channel partner might serve an entire market of 100 clinics. But there’s a good chance it’ll capture 80 percent market share and reap 50-75 percent margins, McBain said.

Channel partners that can hyperspecialize and sell business outcomes to the LOB have a great opportunity to enjoy these margins, McBain said. For every $1 in Salesforce revenue, there’s $4.14 of revenue coming downstream — that is, integration, implementation, installation, security, compliance and business-continuity services.

“The business application layer has the richest margins today in the technology channel,” McBain says. “The size of the channel is going to explode, but not in the traditional sense.”