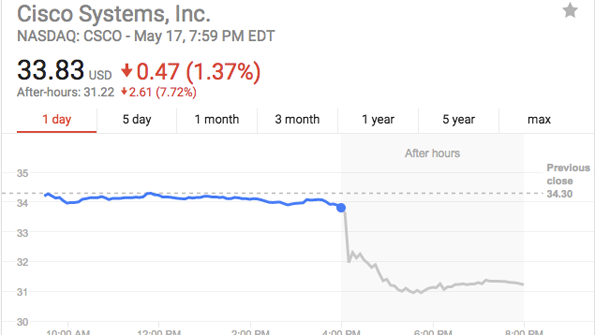 Cisco Systems said it would lay off 1,100 more employees than anticipated after reporting today it expects to miss its fourth-quarter revenue target by as much as 6 percent, year over year.

Cisco now plans to shed a total of 6,600 jobs as the company comes off its sixth straight quarter of declining revenue, amid a pivot from a focus on hardware to software products.

“I am pleased with the progress we are making on the multi-year transformation of our business,” Cisco CEO Chuck Robbins said in a statement.

“The Network is becoming even more critical to business success as our customers add billions of new connections to their enterprises,” the statement continued. “We are laser focused on delivering unparalleled value through highly secure, software-defined, automated and intelligent infrastructure.”

Cisco reported revenues of $11.9 billion for their third quarter – ended April 29 – down 1 percent from the same quarter in 2016.

Despite the air of gloom, net income was up 7 percent year over year, at $2.5 billion.

“We executed well in Q3, delivering $11.9 billion in total revenue, while driving solid profitability and cash generation as we deliver on our strategic priorities,” Cisco CFO Kelly Kramer said. “We will continue to invest in growth areas as we move the business toward more software and recurring revenue and return value to shareholders.”

For the coming quarter, however, Cisco said revenue could fall to just over $12 billion, for Q4, which ends Sept. 30.

Analysts had expected something closer to $12.5 billion.

On an earnings call today, Robbins attributed the revised revenue forecast, in part, to a 4 percent decline in public sector business, which is suffering because of political uncertainty in Washington, D.C.

“It’s a pretty significant stall right now with the lack of budget visibility,” the CEO said, according to Reuters.

Still, even that business fell short of analysts’ expectations of more than $545 million.

The news sent Cisco shares plunging $1.4 percent today, to $33.83 per share, on a day when the broader Dow Jones Industrial Average fell 372.82 points.

Cisco stock fell another 7.7 percent in after-hours trading, to $31.22 per share.