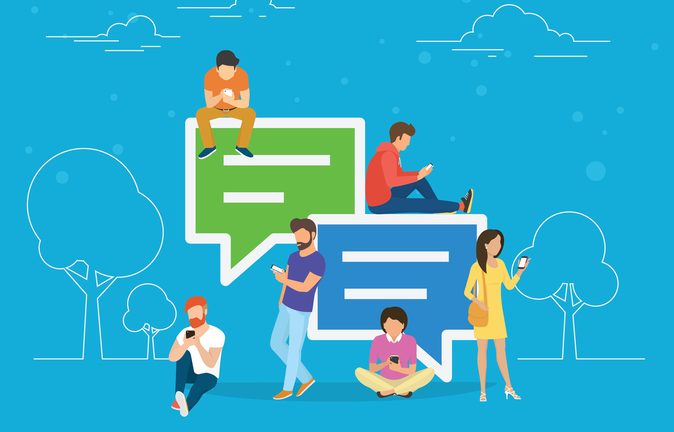 Pros and cons of using digital applications and how to maximize the former and minimize the latter.

In the digital workplace of the 21st century, business communications apps like Slack, Google Docs, Trello and others have removed much of the friction for corporate collaboration. Workers can give and receive small or large amounts of feedback—whatever is necessary for the purposes of accomplishing the tasks at hand. However, these same apps can make people shy away from face-to-face interaction—even when they work side by side in the same office.

“When you have more than 300 collaboration apps to choose from, it’s a clear sign that human-to-human interaction is declining,” says Nabeel Khalid, marketing manager, Crozdesk, a business software discovery portal. “And for good reason too: our primary mode of content consumption today is virtual.”

Also, this could have the perverse side effect of harming human connectedness among managers and their direct reports. And even more so among different generations like Millennials, Gen Xers and Baby Boomers, who may use apps differently.

“Some Millennial employees—not all but some—prefer to use text, apps or social media to communicate versus talking to someone,” says Amanda Ponzar, CMO, Community Health Charities. “A Millennial coworker actually asked me to do the talking with our colleagues because she didn’t want to; she just wanted to stay at her desk and avoid meetings or interactions.”

So let’s look at the pros and cons of using digital applications and how to maximize the former and minimize the latter.

As Principle 6 of the Agile Manifesto states, “the most efficient and effective way of communicating information to and within the development team is face-to-face communication.” So clearly, the founders of Agile understood that the key to developing software was collaboration within the team, according to some experts.

“When teaching classes on project management and Agile, I always emphasize the importance of communications, and the well proven fact that face-to-face communication is far more effective than emails, chats and wikis,” says Alan Zucker, founding principal, Project Management Essentials LLC, provider of project management training and advisory services. “Many organizations work in distributed environments. While distributed teams are a fact of life, we need to recognize that quality of communications is downgraded. We can use tools like Slack, WebEx and Google Docs to mitigate the reduced fidelity of communication. But we need to recognize that they are inherently less productive.”

Unfortunately, this proclivity for using collaborative apps in the enterprise runs counter to the actual results obtained versus face-to-face interaction. For example, a April 2017 study published by Professor Vanessa Bohns in the Harvard Business Review found that face-to-face solicitation requests were 34 times more successful than email solicitations.

“Interestingly enough people who sent email solicitations thought they would be more successful,” Zucker says. “This study supports the often quoted statistic that communications is 93 percent nonverbal. I demonstrate this phenomenon with my students by asking them to line up by birthdate—month and day—without speaking. While there may be a couple people out of order, students are able to communicate and execute this task in silence.”

Use Slack in Combination with Team Meetings

Since Slack took the business world by storm in 2013, with 8,000 customers signed up for the service within 24 hours of its launch, the cloud-based collaboration tool has become a fundamental organizing principle for many startups. And while startup leaders appreciate the capabilities of the application for sharing news across departments and files with coworkers, they have noticed its instant messaging features cut down on useful verbal interchanges.

“While Slack is a great aid to communication, it does reduce the amount of face-to-face communication we have—even between employees sitting next to each other,” says Sean Mallon, CEO, Bizdaq, a cloud-based marketplace for buying and selling businesses. “There’s also the awkward ‘I’ve sent you a message in Slack’ conversation, which while face to face, doesn’t do much to help real-life communication.”

At Bizdaq, they attempt to balance the Slack phenomenon with some good old-fashioned group meetings where people talk directly to each other, eye to eye. And any humanity that has been squeezed out of communicating on Slack is at least partially restored.

“To try and increase the amount of face-to-face communication that we have, we’ve started having regular catch-ups in the morning where we can go through anything we need to off of Slack,” Mallon says. “This helps us to stay connected and chat in person, talking about anything we need to cover.”

In that way, using Slack and face-to-face communication, Bizdaq workers are able to take conversations away from Slack and complete them in the real world or take in-person interchanges and follow them up on Slack. Overall, this approach has helped increase productivity for Bizdaq, according to Mallon.

Managers Be Careful of Sounding too Harsh in Google Docs

Fact: Google Docs has liberated users from desktop word processing applications, always being up to date with the latest version plus adding sharing capabilities. These documents can be distributed without need to email them to coworkers and managers, who can easily enter comments for the entire team to read. Therein lies one potential pitfall of collaborative document creation: because it’s so easy to provide input with just one click, people may not use enough reflection about what they say. While thoughtless feedback from coworkers could be shrugged off, arguably non-constructive critiques from a supervisor could have adverse effects on the author’s self confidence and the confidence of others in her.

“The problem with apps such as Google Docs is that team members don’t seem to collaborate in the same ways as if it were in a one-on-one setting,” says Tyler Riddell, director of marketing, eSUB Construction Software. “Team leaders and management also sometimes feel more free to display harsher criticism.”

On the other hand, Google Docs does help eSUB increase productivity. For example, a group can take notes on a meeting and ask and answer each other’s questions in real time without interrupting the flow of the event, according to Riddell.

Attach Faces to Names to Avoid the Cracks of Slack

One of the great advantages of Slack is the ability to set up multiple public or private channels for discussion. These can either be permanent channels for a department or ad hoc channels meant only for the duration of a project like preparing for a trade show. However, with all these possibilities for places to have discussions, it also increases the chances that details will be lost which are critical to completing a task. For example, one team member might make a valuable point, but because it’s the end of the workday, the team overlooks it during the morning rush the next day, according to Seth Smith, CEO, Kaville, a minimal watch e-commerce startup. And with only the avatar of a user tied to her words—if she bothered to replace the default tartan image—who said what to whom can get ambiguous.

“While technology may be infallible, man certainly isn’t and things can fall through the cracks—especially in Slack channels that have a lot of chatter,” says Haley Steed, SEO outreach specialist, Direct Online Marketing, an online digital marketing and strategy agency. “To combat such oversights, a general rule has been implemented throughout our organization: if you have a time-sensitive issue, walk over to your coworker’s desk or pick up the damn phone and call her.”

Thus, one downside of Slack is that it cuts down on in-person and voice communication, according to some. “I personally find that you mitigate some of that effect through direct/private messages, ‘thumbs up’ on posts and similar social signals,” says Mike Gnitecki, account specialist, Limestone Networks, cloud hosting and storage provider. “But I also find that it is helpful to encourage our people to call each other on the telephone as needed—sometimes a quick voice call is best!”

In any event, the way Direct Online Marketing uses Slack, the agency workers keep a running transcript of delegations, tasks, notes and processes for clients within the application. Then they schedule 20-30 minute bi-weekly, in-person meetings among team members collaborating on an account.

“The face-to-face time with team members to go over details of the account and hash out notes that were taken or delivered in Slack is incredibly beneficial,” Steed says. “There’s something about the energy in a room of people considering client strategy that makes the atmosphere buzz—that’s when great ideas are born.”

Because Slack channels persist for an indefinite time, some startup users have come to feel that they can become a perpetual discussion without end. Plus, with the ability to post stuff instantly and immediately distribute across the enterprise, the temptation for many to share too much non-business information can be difficult to resist. And another feature of Slack, emojis, can cause confusion for those not familiar with these new emoticons, apart from the standard happy and sad faces. Not to mention Slack and other collaboration apps can engender miscommunication in other ways.

“Slack is probably the biggest culprit here because you’re in a forever meeting especially if you don’t know how to switch off,” says Teresa Walsh, a marketing executive at Cazana, a UK startup focused on online buying and selling of used cars. “It eliminates the need for face-to-face communication, and it can be difficult to read someone’s context if she is making a point on Slack. And if you’re feeling threatened by other events you start reading a conversation the wrong way, which leads to office tension.”

Without the until-recent development of Brexit, nationals from other EU countries have been able to come to the UK fairly freely. And UK startups could easily hire these people, especially in technical or programming positions. But quite possibly, some would not know all the standard English language emojis—not to mention the custom icons uploaded by individual users. “Emojis on Slack are another item that can get lost in translation,” Walsh says, “and lead to someone getting the wrong end of the stick.”

One way to overcome this on Slack is to have fun channels where people can post non-work-related content, have random conversations and simply get to know each other better, according to Walsh. That and barbecues, bowling and other offline events can counterbalance Slack to ensure everyone becomes familiar with each other as people and not just as faceless collaborators.