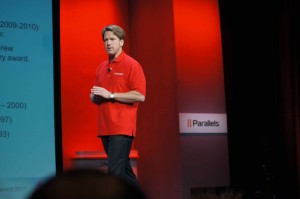 At first glance, Parallels is a relatively small software company — generating about $100 million in annual revenues while helping hosting providers and channel partners to more rapidly deploy SaaS applications. But listen to new Parallels CEO Birger Steen (pictured) and you’ll learn about the convergence of managed services and cloud computing at this week’s Parallels Summit in Orlando, Fla. I’m not here to endorse Parallels’ software, but I can say — with confidence– that MSPs and VARs should start attending the company’s annual partner summit. Here’s why.

This week’s Parallels Summit has attracted roughly 1,300 attendees — mostly hosting providers, but a growing number of VARs and MSPs compared to the 2010 summit. Ingram Micro VP of Managed Services and Cloud Computing Renee Bergeron will take the stage in a few hours to describe how Ingram helps VARs and MSPs to address the SMB cloud opportunity. No doubt, Ingram Micro Cloud — a portal for partners — will earn some mentions.

Rumor has it Tech Data and Synnex — two of Ingram’s core rivals — also are here, holding private meetings and developing new cloud strategies. There are clues that Parallels and Tech Data will expand a European SaaS relationship into North America, though I haven’t been able to confirm the rumor.

IT Service Providers and the Cloud

Big IT companies also are here — everyone from Hewlett-Packard to Intel. The chip giant, for instance, is busy describing the Intel Cloud Builders initiative for channel partners, as explained in this FastChat video from TalkinCloud:

Over and over again, Parallels has told attendees that the biggest cloud opportunities are in the SMB market. One interesting stat: Only about 7 percent of SMBs currently use hosted PBX services. But hosted PBX revenues should quadruple over the next three to five years. Not by coincidence, Parallels is rallying partners around the hosted PBX opportunity.

But where do traditional MSP software companies fit into the picture? Alas, most of the MSP software market skipped Parallels Summit. In my mind that’s a big mistake. Still, some familiar managed services names made the trip. Autotask and ConnectWise are here. Mark Crall, Autotask’s executive director of business and community development, is researching ways to potentially connect the dots between Parallels’ automation software and Autotask’s PSA (professional services automation) software. Ultimately, it sounds like a healthy number of service providers could benefit from such integration.

Some ConnectWise team members also are here, researching the cloud software and technology landscape. As you may recall, ConnectWise Capital is looking to make more investments. So far, the investment portfolio includes CharTec (hardware as a service and backup/disaster recovery) and LabTech Software (remote monitoring and management). Will ConnectWise Capital find its next investment at this event?

I’m not in a position to render a guess on that. But as Woody Allen once said, “80 percent of success is just showing up.”