It's based on what Citrix calls Micro Apps.

CITRIX SYNERGY — In the latest pivot from its thin-client desktop and application virtualization heritage, Citrix revealed plans to turbocharge its cloud-based digital workspace offering with a new user experience that integrates native application components into the desktop and mobile interface.

Citrix previewed the overhauled UX yesterday at its annual Citrix Synergy conference, taking place this week in Atlanta. It is set to go into preview shortly and roll out by year’s end to customers with premium editions of Citrix Workspace App offering, which the company released last year. The revved interface isn’t only cosmetic. It’s based on a modern micro-services architecture that uses artificial intelligence (AI) and machine learning to enable a digital workspace customized for the user with application logic that runs native without launching the apps.

The interface is based on what Citrix calls Micro Apps, that delivers a live feed of the native application components. Citrix said this new architecture, based on last year’s $200 million acquisition of Sapho, will result in a unified and contextual experience for each user on any managed device.

“We’ve infused the workspace with micro apps and intelligence in a way that’s curated to serve you the information that you need, in context, when and how you need it,” said Citrix president and CEO David Henshall, speaking in the opening keynote session, where he revealed the offering. The new cloud-native experience will arrive with connectors to 150 popular SaaS and mobile applications including Microsoft Office 365, Salesforce, SAP Concur and Workday. 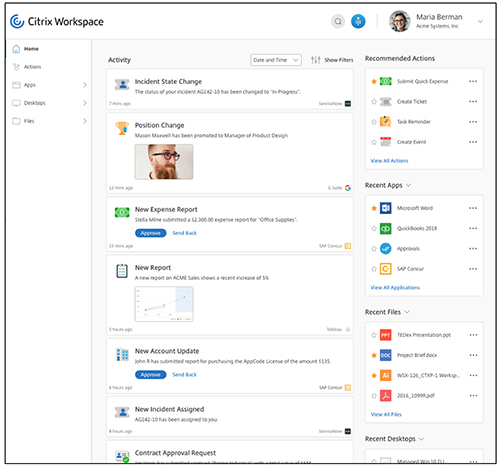 Users can access apps through a single sign-on portal.

Instead of launching the apps from the desktop or mobile device, a user’s Microsoft Teams, Slack, Concur or other key applications’ relevant features or action items from those apps will appear in the Workplace feed. The functions of a given app will run within the Citrix Workspace Cloud activity feed, in context of what a user needs to do, such as approving expense reports or pulling up a CRM record.

Henshall ambitiously predicted that the new digital workspace environment will remove one day per week of tedious work by eliminating the need to access, launch and run different applications. “We think this is a reality,” he said.

Analysts and partners at Synergy said the devil will be in the details but if the solution works as advertised, it could shift the way many people work. “I don’t know if everyone will get a day back every week but the whole idea of coordinating things into a very consumer-like interface, and reducing long multi step procedures is powerful,” said Bob O’Donnell, founder and principal analyst at Technalysis.

“Cloud desktops are starting to appeal to a larger user base,” said Forrester research director Christopher Voce, who noted that the focus on digital workspace environments is becoming competitive. “Certainly, VMware is starting focus and employee experience as well as Microsoft, Google and other. Everyone’s now starting to realize the importance of employee experience and their role in it.”

In addition to 150 planned Micro Apps that will work in the updated Citrix Workspace, the company will offer a tool that will let partners build integration with custom applications. The Micro App Builder will let developers …