New reports show the rippling impacts enterprise migration to the cloud is having on IT.

The impacts of the migration of enterprises and other organizations into the cloud continues to ripple through the IT industry, with two reports reiterating the how central the compute model has become to enterprises’ strategies.

Gartner analysts said this week that the global public cloud services market will grow 17.5 percent this year, reaching $214.3 billion in 2019. Last year it was $182.4 billion. 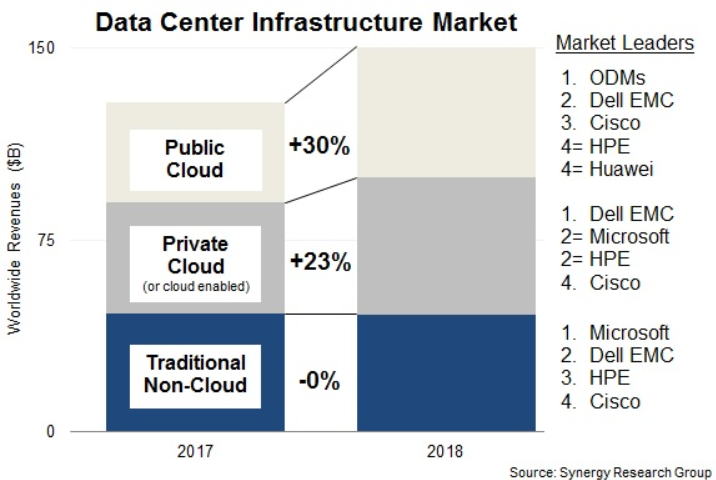 Worldwide, such spending in 2018 increased 17 percent, with public cloud services and the need for richer server configurations – due to increasingly complex workloads and the push toward private clouds – being among the factors fueling the spending growth. The spending on public-cloud infrastructure jumped 30 percent over 2017, the analysts said.

Both reports are additional proof points that more data and workloads – and the changing nature of workloads that are increasingly leveraging such tasks as artificial intelligence (AI), machine learning, analytics and virtual and augmented reality – are moving into the cloud to help increase efficiencies, reduce costs and improve operations.

The numbers from Gartner and Synergy Research reinforce what analyst firms, vendors and channel partners have been seeing for the past several years. Most recently, IDC analysts in February projected that spending on public cloud services and infrastructure this year will hit $210 billion – a 23.8 percent over 2018 – and will reach $370 billion in 2022.

Eilleen Smith, program director of IDC’s customer insights and analysis group, said at the time that while most organizations have embraced the public cloud “as a cost-effective platform for hosting enterprise applications and for developing and deploying customer-facing solutions. Over the next five years … cloud platforms and ecosystems will serve as the launch pad for an explosion in the scale and pace of digital innovation. The result will be ‘multiplied innovation’ with as many new applications deployed in the cloud as prior generations deployed over the previous four decades.”

Multiple recent studies have shown that many enterprises are not only adopting the public cloud, but pursuing multicloud strategies that call for using more than one public cloud provider. Network analytics vendor Kentik in January said 58 percent of survey respondents claimed to use more than one provider, with 18 percent saying they were using AWS, Azure and Google Cloud. In its own study, Flexera found that 84 percent of companies have multicloud strategies.

Such survey results help explain the spending numbers that Gartner, Synergy Research and others are finding.

“Cloud services are definitely shaking up the industry,” said Sid Nag, research vice president at Gartner. “We know of no vendor or service provider today whose business-model offerings and revenue growth are not influenced by the increasing adoption of cloud-first strategies of organizations.”

That trend will only continue, Nag said, adding that the market for cloud services will see …