Gavriella Schuster "underestimated the value" of internal use rights.

(Pictured above: Microsoft channel chief Gavriella Schuster (in yellow, in front standing row) poses with members of the IAMCP board at their meeting ahead of Microsoft Inspire, July 13.)

MICROSOFT INSPIRE — Microsoft channel chief Gavriella Schuster opened this week’s Inspire conference with an apology to for its attempt to eliminate internal use rights (IUR), a move widely condemned by thousands of partners. After rescinding that move late last week, Schuster’s took the stage and addressed the contentious issue in her opening remarks to thousands in attendance and those watching the live stream.

“As you may know, a couple of weeks ago, we announced changes to the program competencies and internal use right, and the response from you – our partner ecosystem – was overwhelmingly negative,” Schuster said. “We clearly underestimated the value of those benefits and the impact that would have on you and your businesses.”

Schuster on Saturday, in an impromptu appearance at an International Association of Microsoft Channel Partners (IAMCP) board meeting, apologized in person for the company’s handling of several planned changes. The appearance at the IAMCP meeting came the day after she announced that Microsoft decided not to implement the changes that had announced in recent weeks. The most notable change was the elimination of IUR. As thousands of partners protested Microsoft’s plan to eliminate IUR, other major changes went under the radar.

Among others, Microsoft had announced it was increasing the minimum revenue requirements to become gold and silver partners. The company had also planned to change the revenue-sharing mix for Azure AppSource. Members of IAMCP, a worldwide consortium of 3,000 influential Microsoft channel partners, appreciated Schuster’s attendance at Saturday’s meeting, held in Las Vegas in advance of Microsoft’s annual Inspire conference. 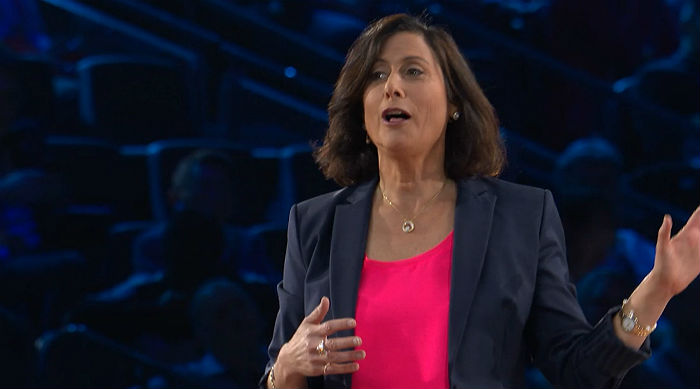 “They were very nice and apologetic,” Jeffrey Goldstein, managing director of Dynamics gold partner Queue Associates, and president of the IAMCP’s U.S. chapter, told Channel Futures. “Everybody was uptight coming to the conference, not knowing what to expect. It was going to be a big distraction. So everybody is very relieved. The conversations were very pleasant. They heard the feedback from the partners. They hadn’t realized what the impact would be, so they rescinded it.”

Asked if Schuster explained why Microsoft wanted to eliminate IUR, Goldstein said there were two primary reasons: cost, and the fact that some partners weren’t using the access rights and Action Packs the way they were intended. The latter is mostly a problem outside of the U.S. The shift of Microsoft’s core software offerings to the cloud had a major impact on the cost off offering IUR, Goldstein explained.

“They basically said in the past, when they gave us software licenses, it cost them nothing; they just gave you a license key and said, ‘Go use it and run it on your servers,’” Goldstein explained. “Now when they give us licenses, there’s a cost associated with it, because not only are they giving us the licenses, [they’re] providing the hardware and cloud resources to be able to run it. So there’s a tremendous cost of sale involved in it and they have a [profit and loss] that they’re trying to manage.”

Also adding cost is the fact that many partners have active licenses that aren’t in use, akin to leaving the lights on in an unoccupied room.

“If you’re paying the bill, you tend to turn the lights off,” he said.

Goldstein said this isn’t the first time Microsoft has announced a major change that raised the ire of partners. Schuster emphasized that Microsoft signs 7,000 and 9,000 new partners every …