The company’s OpsQ platform delivers hybrid IT services to enterprises and MSPs.

OpsRamp for the past few years has sold its AIOps-based platform to enterprises and MSPs. Now the seven-year-old company is aggressively growing its channel partner program to make a hard push for resellers.

OpsRamp on Thursday launched its new channel program that includes a single partner portal; a support program featuring sale support, education and customer onboarding; and co-marketing efforts with new go-to-market strategies, event opportunities and co-branded plans to accelerate demand generation. The goal is to grow the number of resellers for OpsRamp’s AIOps software as a service (SaaS) platform, according to Denny Riley, the company’s global channel vice president.

“We’ve always really had the reseller aspect,” Riley told Channel Futures. “Some of the MSPs that were working with us over the long term had the resale business going, so they were doing some reseller business. But in the last year we’ve really started to put a push behind it. I have been assigned the job of bringing it together and recruiting. We’ve gone from probably two or three big sellers in the past six to seven months … to about 20 at this point in time.”

OpsRamp leverages AIOps technology in its OpsQ platform, which is armed with intelligent event management, alert and remediation capabilities to give enterprises and MSPs greater visibility into complex hybrid cloud and multicloud environments. With the platform, enterprises can provide IT operations as a service, including monitoring and management of services.

At the heart of it is AIOps, or artificial intelligence for IT operations, a fast-growing market segment that leverages analytics and machine learning to help organizations manage their IT environments at a time of rapid change driven by such trends as the cloud and data proliferation.

A recent report from Infoholics Research says the worldwide AIOps market will grow 33% per year between 2018 and 2024. A survey last year by OpsRamp found that 87% of technology professionals said that AIOps tools enable them to be more proactive in IT operations and they help eliminate low-value repetitive tasks, accelerate remediation and enable better infrastructure performance. 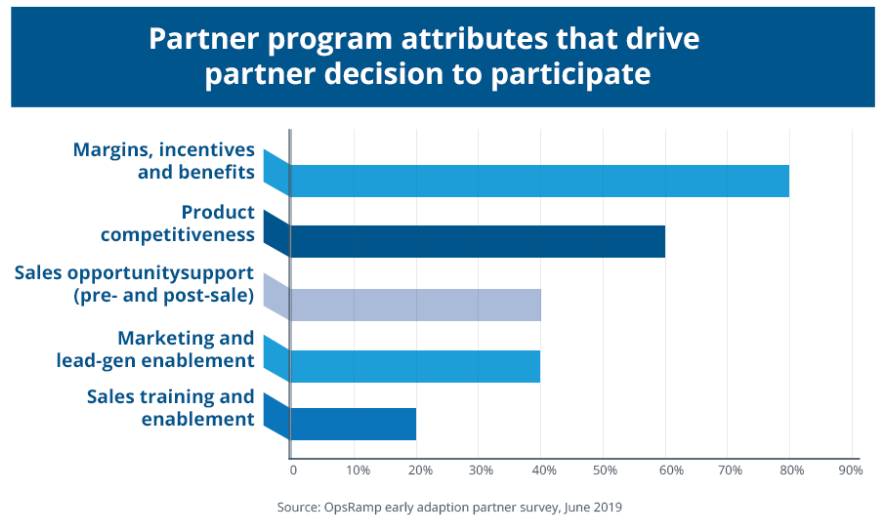 For OpsRamp, AIOps is the engine that drives its platform, Riley said.

“We are using AIOps specifically, as it is an engine to derive a great solution,” he said, adding that enterprises “need a solution that really helps them bring together their whole environment.”

Growing the business will mean growing the channel program. For most of its history, OpsRamp has sold directly to MSPs and enterprises, and considered MSPs as channel partners. However, Mike Munoz, who came aboard as the company’s chief revenue officer more than a year ago, has changed that thinking, viewing MSPs as customers and putting the channel focus on resellers and VARs, Riley said.

The new program comes with a host of resources aimed at sales and technical training, marketing and demand generation. The aim is to enable partners to develop expertise around hybrid cloud and multicloud infrastructure management leveraging AIOps.

The company has had a partner program, but it primarily involved Riley trying to sell it to partners.

“We’re putting a lot of the time and energy into resources, a partner portal, specific communications,” he said.

One goal to be easy to work with, Riley said. There aren’t a lot of agreements for partners to sign and they can essentially try it on a trial basis by doing a deal or two with OpsRamp before signing a reseller contract. The vendor also plans to have …