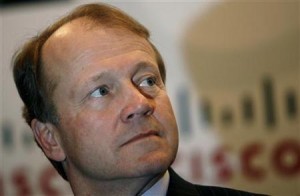 As Cisco Partner Summit 2011 approaches, imagine the following scenario: Cloud stocks are trading near all-time highs and the Dow Jones stock index sits near a 30-month high… but shares in Cisco Systems are sitting at a 52-week low. So what’s ailing Cisco? The networking giant blames weak government spending on IT. But some pundits think Hewlett-Packard, Juniper and others are chipping away at Cisco’s market dominance. Now, a reality check from The VAR Guy.

First, let’s keep the situation in perspective. Cisco remains a giant. In its most recent quarter, revenues topped $10.4 billion and net income was $1.5 billion. The trouble, however, involves Cisco’s profit margins and an apparent price war with Hewlett-Packard, asserts Barron’s. Smelling blood in the water, HP is telling media outlets like CRN that HP networking sales are growing astronomically.

This isn’t the situation Cisco CEO John Chambers imagined a year or two ago. Throughout the recession, Chambers predicted that Cisco would emerge even stronger post-recession because the company was investing heavily in R&D and channel partner programs.

No doubt, HP is putting pressure on Cisco Systems. But perhaps the real challenge comes from within Cisco itself. One potential problem: Perhaps Cisco is spread thin chasing dozens of emerging market opportunities — everything from consumer telepresence, to corporate tablets to unified computing and servers in the data center.

By chasing so many different markets, Cisco could become a master of none, according to one major Cisco partner who’s growing concerned about the networking giant. “This isn’t the Cisco of the 1990s,” the partner said. “Cisco sometimes seems to be on the defense these days. The Cisco of the 1990s was always on offense.”

Hmmm… The VAR Guy isn’t ready to press the panic button. Cisco has a chance to rally partners in a big way during the upcoming Cisco Partner Summit 2011 (February 28-March 3, 2011). No doubt, Hewlett-Packard will return fire during the upcoming HP Americas Partner Conference 2011 (more details soon). Of course, The VAR Guy will be sure to cover the blow-by-blow.