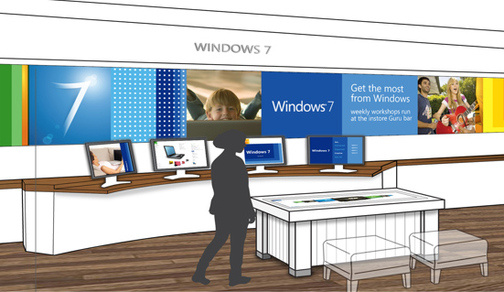 
As you likely know, Microsoft plans to open retails stores sometime in the fall (U.S. seasons). But a 140-page slide presentation -- featuring a sneak peek at the stores -- has been leaked onto Gizmodo.com. Hmmm. Here are some of early perspectives.

As you likely know, Microsoft plans to open retails stores sometime in the fall (U.S. seasons). But a 140-page slide presentation — featuring a sneak peek at the stores — has been leaked onto Gizmodo.com. Hmmm. Here are some of early perspectives.

Essentially, Microsoft is taking the best elements from the Apple Store, Sony Style and other “flagship” stores. The main focuses are going to be Windows 7, Xbox, PCTV (Windows Media Center) Surface and Windows Mobile, revolving around this concept customer they call “Emily,” who’s basically a younger version of your mom, since they make all the buying decisions.

The VAR Guy must concede: He’s a huge fan of the Apple Store concept and the Apple Store Genius Bars. Those bars have answered urgent questions and addressed key technical issues time and time again for our resident blogger. Microsoft will counter with The Answers Bar or Guru Bar or Windows Bar, according to Gizmodo.

Translation: Looks like Microsoft has its Thesaurus out, looking for “Genius” synonyms…

Some skeptics have completely dismissed Microsoft’s forthcoming stores before they even open. But The VAR Guy is keeping an open mind. One of Microsoft’s biggest challenges is complexity: The company simply has too many business and consumer products for novices to track. The retail stores could help customers — and Microsoft itself — to more easily spot what’s next in consumer and corporate IT.

Oh, and kudos to Gizmodo for such a comprehensive report/look at Microsoft’s retail store strategy. Hats off from The VAR Guy.