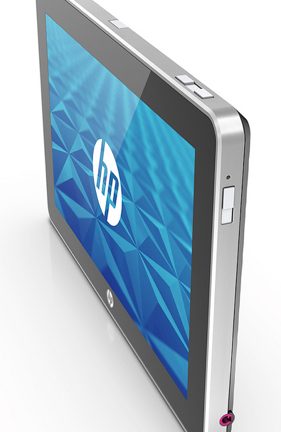 Oh the Tablet buzz never ends. As we all know Apple's iPad won't support Flash anytime soon, but the HP Tablet (or Slate) will support Flash, naturally, because it's running Windows 7. HP and Adobe intend to capitalize on that fact. In fact, Adobe showcased Flash on the HP tablet with it running AIR applications as well, and that got people thinking...

Oh the Tablet buzz never ends. As we all know Apple’s iPad won’t support Flash anytime soon, but the HP Tablet (or Slate) will support Flash, naturally, because it’s running Windows 7. HP and Adobe intend to capitalize on that fact. In fact, Adobe showcased Flash on the HP tablet with it running AIR applications as well, and that got people thinking…

Engadget, of course, jumped on the opportunity to poke out some interesting tidbits of information:

Interestingly, Flash is said to be hardware-accelerated on the Slate, which suggests something other than a bone-stock Atom setup in there — we’d guess it’s an Atom plus a Broadcom Crystal HD Accelerator, but there’s a chance it’s something else entirely

If you’re unfamiliar with what the Broadcom Crystal HD Accelerator does, it’s pretty simple: it off-loads video rendering from the CPU to a dedicated GPU of sorts: but it’s not a video card, it’s only for dealing with video playback. In fact, people have been hacking it into the AppleTV so it doesn’t stutter during HD playback of Blu-Ray rips and other HD content. Not only does that mean you can save power by offloading data from the CPU, it means you’re guaranteed smooth playback. This could mean the HP Tablet might reach that 10 hour mark done so well by Apple.

Perhaps more fun is the fact that InformationWeek is reporting HP has directly jabbed at Apple on March 9, 2010:

HP said Tuesday it’s readying a Windows 7-powered slate PC that it claims will offer a more complete computing experience than Apple’s iPad. With this slate product, you’re getting a full Web browsing experience in the palm of your hand,” said Phil McKinney, HP’s VP and chief technical officer for its Personal Systems Group, in a blog post. “No watered down Internet, no sacrifices,” wrote McKinney.

So with the fight over Flash and Internet experience being the split between Tablet camps, it’ll be interesting to see not which tablet gets favored, but who favors which tablet and why. The real story might end up being that both camps are winners for different reasons. Both tablets are aimed at productivity, since the iWork suite is available on the iPad and both devices allow for an external keyboard.

Could the iPad and HP Tablet see success similar to the Mac Vs PC Wars? Could it really be that simple?

Here’s a better question that makes the inner hacker in me smile: Will you see the HP Tablet hacked to be a Mac? Will it be the iPad for all the people who didn’t want the iPhone OS but a Mac OS X based tablet? How soon before “Hackintoshing the HP Tablet” becomes a common activity?